Behind the Scenes of The Wiz With Michael Jackson

Before there was NBC’s The Wiz Live!, starring Queen Latifah, Mary J. Blige, David Alan Grier and Stephanie Mills, there was The Wiz, a 1978 movie based on the musical of the same name.

This earlier production of The Wiz could have been so much better. It had a great concept (an African-American take on “The Wizard of Oz” in which the characters don’t follow the yellow brick road, they ease on down it), a strong director (Sidney Lumet, who’d just done Dog Day Afternoon and Network) and a solid cast (Diana Ross as Dorothy, Richard Pryor as the Wiz, Nipsey Russell as the Tin Man). And it had Michael Jackson, a year before he would start his solo career with immortal dance hits such as “Don’t Stop ‘Til You Get Enough” and “Off the Wall.” But The Wiz was most important for what happened behind the scenes—veteran producer Quincy Jones, Lumet’s longtime film-score colleague, was musical director, and he met his future “Thriller” collaborator MJ by correctly pronouncing “Socrates” to the young singer on set. Later, Jones called his new friend and listened intently as MJ explained he could hear fully formed songs in his head and needed someone to help write them down.

The Wiz came along at a perfect time for Berry Gordy and Motown Records. To finish Lady Sings the Blues, Gordy had to sink in $2 million of his own money because Paramount’s top executive, Frank Yablans, had told him the maximum a studio could spend on a black film at the time was $500,000. “This is not a black film,” Gordy corrected him. “This is a film with black stars.” There were clashes on the set, as star Diana Ross made her transition from music diva to Hollywood diva, demanding an upgrade of her period-piece wardrobe. But the 1972 drama was a success in the end, drawing five Oscar nominations, although Ross lost Best Actress to Liza Minnelli of Cabaret.

In 1977, Motown bought the rights to The Wiz, a script based on a Broadway hit with African-American stars putting their own spin on The Wizard of Oz. Gordy and producer Rob Cohen cast Ross, then 33, as Dorothy. The director who signed on, after a number of false starts, was Sidney Lumet, who had collaborated with a young Al Pacino on Dog Day Afternoon and Serpico. At 53, Lumet was an old Hollywood hand with fast-talking charisma, ending sentences with “darling sweetheart.” To give The Wiz an orchestral punch, Lumet sought out an old friend to request a favor.

Q didn’t want to do it. Jones liked only three songs from the Broadway show—“Home,” “Brand New Day,” and a funky ensemble number called “Ease On Down the Road.” But he felt indebted to Lumet, who’d hired him for many film scores in the past. “I felt I owed him more than one,” Jones said of Lumet. “I owed him a lot.”

Lumet stocked The Wiz with top-tier African-American talent—Ross, Richard Pryor, Lena Horne. Rob Cohen, head of Motown Productions, thought Michael Jackson would be perfect for the role of the Scarecrow, and he approached Gordy with the idea. To his surprise,

Gordy agreed. “Aw, Michael’s great,” said the Motown chief not far removed from years of litigation with the Jacksons over contracts. “Michael’s a star.”

Lumet was harder to convince. He wanted Jimmie “J. J.” Walker, star of TV’s Good Times. “Michael Jackson’s a Vegas act. The Jackson 5’s a Vegas act,” the director told Cohen. Quincy Jones was skeptical of Jackson, too, but Cohen arranged a meeting, flying 19-year-old MJ to New York. Finally, Lumet and Jones saw the qualities that Cohen saw. “That boy is so sweet! He’s so pure!” Lumet exulted. “I want him as the Scarecrow.”

The final barrier was Joe Jackson, who wasn’t thrilled about Michael doing a project that separated himself financially from the rest of his siblings. Cohen mollified Joe by offering roughly $100,000 for Michael to play the Scarecrow. When The Wiz began filming in New York, the 27-year-old producer moved Michael and La Toya into a Manhattan apartment, and Michael was on his own for the first time. He lived a normal life, except for a strange habit Cohen happened to discover—taking baths in Perrier water.

The shoots were long and grueling, lasting all day underneath the World Trade Center towers. At night, the young cast went out to play in New York City. Cohen took Michael, along with other members of the cast, to Studio 54, the disco hot spot known for both its crazy sexual escapades and celebrity regulars like Andy Warhol, Mick Jagger, Cary Grant, and Brooke Shields. The rest of the club took notice whenever Michael Jackson danced. “The gay side of the dance floor would stop,” Cohen says, “and the hetero side would stop.”

During lunch on The Wiz set, Lumet, the director, told an oblivious Michael that women around him were “like ricocheting bullets all over the place.”

On the set, Michael took extremely seriously his choreography sessions with Louis Johnson, who’d been a pioneering African-American ballet dancer over years of punishing Hollywood racism. In the film, Michael’s most impressive steps are with Diana Ross, as he clumsily learns to walk after being imprisoned by crows on his scarecrow pole. In giant clown shoes, he stumbles, rolls on the ground, and knocks out his knees. “He had seen Charlie Chaplin. He was a great fan of Fred Astaire and Gene Kelly,” says Johnson, who is in his early eighties, by phone from his New York home. “So I let him use it … He asked me, ‘Could I do this?’—and then enhanced it.” Jackson’s Scarecrow costume was hot and cumbersome, with a huge curly wig, a hat and vest stuffed with scraps of newspaper, not to mention a painted-on nose. Tony Walton, the film’s production and costume designer, didn’t know Michael was tormented by his brothers’ constant teasing—they called him “Ugly” and “Big Nose.” “He was thrilled to have his nose covered,” Walton says. His costume, stuffed with newspaper and bits of trash bags, was more cumbersome, but Jackson made it work.

Quincy Jones was always present. (In the film, Jones appears dressed in gold, playing a giant piano in Times Square.) He, too, began to pay attention to Jackson. When it came time for the Scarecrow part, Michael stepped to the microphone and began to sing, not the bright-sounding Michael Jackson of “I Want You Back” but the 18-year-old MJ whose voice had evolved into something as smooth and powerful as the Concorde. Cohen, the producer, noticed Jones gaping. “He looked at Michael the way a jaguar looks at a goat,” Cohen says. “It was like, ‘I want him.’ ”

Jones made his move on the set. At one point, he took Michael aside to explain a Scarecrow bit in the script—that the Greek philosopher’s name is pronounced “Sock-ra-tees” and not “Sow-cray-tees.” As Jones would tell the story, he asked Michael right then if he could “take a shot” at producing his next solo album. That stuck with Michael. During The Wiz post-production, he called Quincy unexpectedly during a rare home hiatus from touring. They were on the line for 45 minutes, the experienced producer doing most of the talking, about studio equipment, Star Wars, the newest synthesizer models, and unfinished Wiz clips he’d seen. Michael mostly listened, with “mmm-hmms” and an occasional “whoo!” When Quincy enthusiastically mentioned he’d seen the Rolling Stones perform, Michael sniffed, “You know it’s not talent, though.” The key moment in this nascent partnership came when Michael said he’d been writing songs: “I hear something in my head. I make the sounds with my mouth—I can do that.” Quincy became excited. “There’s an instrument that can make the sounds you want. I can write anything down on paper,” the veteran arranger said. “If you can hear it, I can write it down.” The exchange, which MJ recorded, ends with Quincy requesting his number.

The Wiz cost $22 million and did not perform well at the box office. It was a spectacular, flawed experiment. Michael and Diana have terrific chemistry, but Ross is mismatched for the part. Not because she’s too old (although she is), but because she plays Dorothy the same way she played Billie Holiday, with an emaciated world-weariness, when the part, as Judy Garland had shown the world forty years earlier, called for a wide-eyed, childish wonder. A less obvious problem was that during filming, Lumet’s wife at the time, Gail Jones, daughter of Wiz star Lena Horne, had approached the director on set and asked for a divorce. The usually exuberant Lumet became despondent—a quality that came out distinctively in the film, recalls production designer Tony Walton. “Everybody has a crying jag—the Lion cries, and Diana Ross and the Tin Man,” he says. “None of which was really in the script.”

The Wiz has its timeless qualities, especially the lovingly rendered scenes to Lumet’s home city, prominently showing landmarks such as Coney Island, Shea Stadium, and the Brooklyn Bridge. But its reception was marred by racist backlash. Theater chains in white neighborhoods wouldn’t schedule The Wiz for fear of scaring off white regulars, producer

Cohen recalls glumly. “As big and as spectacular and as musical as it was,” he says, “we never got a real solid distribution.” Black films, aside from Shaft, were for black audiences. White films were for white audiences. Just as black music, despite brief exceptions such as Motown and disco, had been for black radio stations and white music for white radio stations.

Somebody needed to fix this problem.

This has been adapted from Steve Knopper’s MJ: The Genius of Michael Jackson (Scribner). 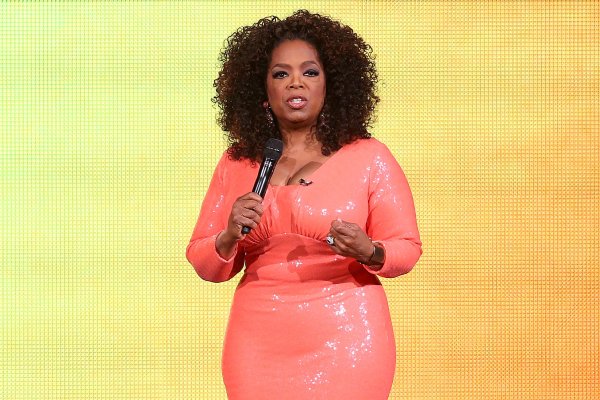 Oprah to Publish New Memoir: The Life You Want
Next Up: Editor's Pick