South Carolina Sen. Lindsey Graham excoriated several of his Republican rivals for their harsh rhetoric on immigration and social issues Thursday, suggesting that Donald Trump, Ted Cruz, and Marco Rubio are incapable of winning a general election because of their positions.

Speaking before the Republican Jewish Coalition, Graham set aside his usual speech on foreign policy to call for moderation in a party that he said has shifted to the extreme.

“I believe Donald Trump is destroying the Republican chances to win an election that we can’t afford to lose,” Graham said. “I believe that it’s not about turning out evangelical Christians; it’s about repairing the damage done by incredibly hateful rhetoric,” he added, alluding to Ted Cruz’s electoral strategy and the damage the party has done with Hispanic voters.

Cruz has argued that the party needs to embrace its conservatism in order to turn out millions of evangelical voters he argues have “stayed home” when moderates are running as the GOP nominee.

“That is the leader of the Republican Party,” he added. “You think you are going to win an election with that kind of garbage.”

Speaking minutes after Ted Cruz left the stage, Graham said he too could not win, owing to his opposition to abortion even in cases of rape and incest.

Neither does Sen. Marco Rubio, who defended the same exceptions during a primary debate earlier this year.

Graham closed his speech with a quick tour of the nation’s foreign policy threats, calling for the immediate abrogation of the Iran nuclear deal and espousing his support for Israel.

The hawkish lawmaker, who barely registered in the polls, made an appeal for support to the well-heeled audience, saying, “I’m at 1 percent. The election is a long way away. Help me stay in this race.” 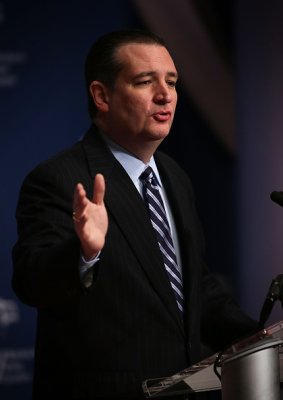