This Country Says Thousands of Hoverboards Are Too Dangerous to Import

A youth poses as he rides a hoverboard, which are also known as self-balancing scooters and balance boards, on October 13, 2015 in Knutsford, England. The British Crown Prosecution Service have declared that the devices are illegal as they are are too unsafe to ride on the road, and too dangerous to ride on the pavement.
Christopher Furlong— Getty Images
By Lisa Eadicicco

Celebrities from Justin Bieber to Kendall Jenner have been spotted riding self-balancing “hoverboards,” the latest trendy item popularized by social media. But concerns are emerging over the devices’ safety, with a particular focus on their electrical systems.

One of the most aggressive moves yet to clamp down on hoverboards has come from the United Kingdom, where officials announced Thursday they have detained 15,000 of the devices due to “major safety risks” related to their electrical systems.

Many of the Segway-like scooters were found to have non-compliant plugs without fuses, which could cause the device to overheat, explode, or catch fire, according to the U.K.’s National Trading Standards group. Officials have seen a significant spike in the number of these devices arriving in the U.K. recently, likely due to the holiday shopping season.

All this comes amid a number of incidents concerning hoverboards’ safety elsewhere in the world. On Tuesday, an NBC News local affiliate reported that an exploding self-balancing scooter caused a house fire in Louisiana. Meanwhile, some cities, including New York, consider the devices unsafe for use on busy urban sidewalks.

More than 20 companies, many of which are located in China, manufacture and sell these scooters. Two brands have emerged as the most popular: IO Hawk and PhunkeeDuck. They also happen to make the most expensive models, with their scooters ranging from $1,500-$1,700 while other companies sell them as cheap as $350.

IO Hawk President John Soibatian argues that buying cheaper devices from his company’s rivals is unsafe, as they use less expensive batteries to cut costs. “Most of them are having so many problems and failures because they’re not technology companies,” Soibatian said in a previous interview with TIME.

IO Hawk and PhunkeeDuck couldn’t immediately be reached for comment regarding the safety status of their products.

The National Trading Standards recommends that hoverboard owners exercise caution and never leave the scooter unattended while it’s charging. A clover-shaped plug could also be a red flag.

“Criminals and irresponsible manufacturers will often exploit high demand and attempt to flood the market with cheap and dangerous products,” Leon Livermore, chief executive of the Chartered Trading Standards Institute, said in the report. “Consumers should not let a new fashion or craze could their judgement and remain vigilant at all times to avoid taking home an unsafe product.” 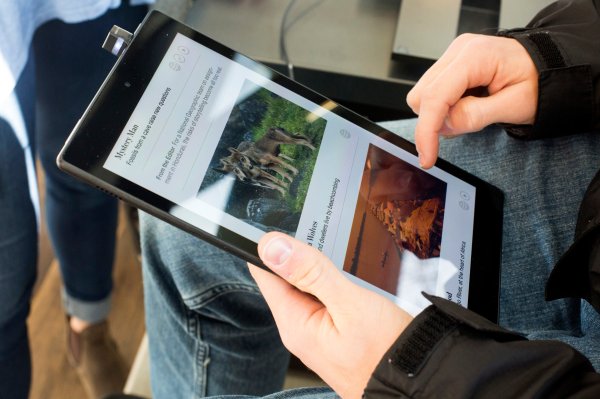 Amazon's Tablets Are Getting a Killer New Feature
Next Up: Editor's Pick