How the Mafia Make Millions Out of the Plight of Migrants

In the dark and dirty alleys of Ballarò, an ancient neighborhood in the heart of the Sicilian capital Palermo, dozens of African drug dealers sit on their scooters, waiting for clients. They smoke and chat to kill time.

They’re young and many of them have crossed the Mediterranean on boats and rafts. Willy, a 29-year-old Nigerian with long rasta-style hair and and disheveled beard, left Nigeria in 2013. He now lives in Ballarò and sells a gram of marijuana for 10 Euros.

“When I arrived in Palermo, in this neighbourhood only Italians were authorised to push,” he says. “Now they’ve also granted us Nigerians permission to sell. It’s worth it for the Sicilians: our money still ends up in the pockets of the mafia boss.”

Willy is one example of how the Sicilian mafia has turned Europe’s refugee crisis to its financial advantage. The Sicilian mafia are making millions from taking advantage of migrants and refugees, organizing their journeys from North Africa to Europe, embezzling funds provided for their welfare in camps in Sicily and then using some of them as prostitutes and drug dealers, police and prosecutors have revealed to TIME.

In 2014, 140,000 migrants arrived in southern Italy including Sicily, according to the E.U. borders agency Frontex. They have yet to publish numbers for 2015. The migrants, many of whom were rescued from boats that sailed from Libya, joined thousands of other migrants in one of six government-funded camps in Sicily including one at Mineo, which accomodates 4,000 migrants. The government provides 40 euros per day for each adult and 80 euros for each child, to provide for shelter, food, education and other upkeep. The budget for Mineo is around 98 milion euros per year.

Carmelo Zuccaro, chief prosecutor in Catania, Sicily’s second-largest city, who is heading the investigation into corruption in Mineo says he believes tenders for services to the camp have been directed to companies controlled by the mafia by corrupt government officials. The mafia-run company than provides far cheaper services than a commercial company would and pockets the difference. The investigation continues.

The suspected embezzlement in the camps was only discovered after prosecutors concluded some of their investigations into the mafia’s role in transporting migrants into Sicily.

Police documents reveal how “the mafia has forged links with some North African smugglers and arranged the delivery of boatloads of refugees from the Egyptian beaches of Gammasse and Jamsa to Europe, offering shelter, food and transport to north Europe in exchange for vast sums of money which refugees paid out to Egyptian people smugglers.”

The investigation started five years ago when a newly-arrived refugee told the Sicilian police how “he overheard one of the boatmen talking about a certain Greco and how he was organising immigration smuggling in Egypt.” A month later, police tapped the cellphones of over 61 suspects.

Salvatore Greco, 61, head of the Brunetto Sicilian mafia clan of Riposto, a town on the Ionian coast of Sicily who organized immigration smuggling with Egyptians, in a mug shot in Siracusa, March 24, 2011.
(Courtesy of the Italian Police)
Arafa Badawi, 51, Egyptian smuggler said to have arranged refugee crossings to Europe with Greco. Egypt rejected Italy's request for his extradition; he was murdered in Egypt in 2012. Italian police received this ID photo from Egyptian authorities, Feb. 4, 2011.
(Courtesy of the Italian Police)Mohamed

The police discovered that Salvatore Greco, 61, head of the Brunetto mafia clan of Riposto, a small town on the Ionian coast of Sicily, had made contact with an Egyptian smuggler called Mohamed Arafa Badawi, 51. Badawi and his son, Sayd, 30, arranged refugee crossings to Europe and Greco supplied motorboats to bring migrants ashore from the mother-ship, hide them and organize their transportation to northern Europe.

Carlo Parini, the police chief who headed this investigation, explained the “logistical aspects were established when Greco travelled to Milan in February 2011 to collect a 15,000 euro down payment for operational costs’’ from Nabil Sorour, 41, known to the police as ‘’Il Cassiere’’, the ‘cashier’ of the Italo-Egyptian smuggling network.

Badawi wired money via Western Union to Sorour in the north of Italy, who transferred it to the mafia. According to the police, Badawi charged between $3,000 to $6,000 per person for the journey from North Africa to Sicily. A single shipload of 200 migrants could generate at least $600,000.

On March 21, 2011, a 25-meter boat, with 190 migrants, was tracked by police as it approached a point 12 nautical miles from the coast of Riposto. Two smaller fishing boats, organized by Greco, sailed towards the the mother-ship at around 3.30am to take the refugees to land. At that point, an Italian coast guard vessel arrived and arrested the 19 crew members and took the migrants on board.

Greco and Sayd Badawi managed to flee on one of the two boats. Greco and his son Massimo were arrested 3 days later in Riposto and were sentenced in Catania to 5 years in prison for facilitation of illegal immigration and conspiracy.

Sayd Badawi was arrested in April in Bergamo, north Italy and Sorour was captured in Lodi, near Milan. Egypt rejected Italy’s request for the extradition of Mohamed Arafa Badawi but he was murdered in Egypt in 2012. According to Parini, the police chief: “The police believe that he was killed by his collaborators. Probably he was not sharing enough of the profits.”

Even after the initial arrests the gangs continued to extort money from the migrants. According to the police, in May 2011, an Egyptian suspect, Fathy Abdelkader, 51, kidnapped six child migrants from a camp near Siracusa, southeast Sicily. “The kidnappings were a message for the families of migrants who had failed to pay for services rendered by the Cosa Nostra,” said Parini. “We monitored phone calls made by Fathy to the families of kidnapped migrants who were made to listen to their children’s screams.” Abdelkader was soon arrested and the children rescued, frightened but not injured.

Back in Ballarò, an estimated 1,500 Nigerians are living. Many are illegal migrants and some work for the mafia.

‘’It is evident that the dealers work with the Cosa Nostra’s (the mafia) permission and give them a big portion of their profits,” says Maurizio Scalìa, the chief prosecutor in Palermo who led people smuggling investigations, “and the same goes for other criminal sectors such as prostitution, which is managed by foreign criminal organisations who are nonetheless required to devolve part of their income to the mafia.’’

According to police, young refugee women are often forced into prostitution in order to pay for their journey to Europe. Some are believed to have been forced to migrate to work as prostitutes. According to the Italian Ministry of the Interior, the number of Nigerian women who land in Italy has risen from 1,008 in 2014 to 4,371, as of September 2015.

Proof of the understanding between the mafia and Africans in Sicily emerged in a conversation taped by the police in 2014 between Giovanni di Giacomo, a jailed mafia boss, and his brother Giuseppe, his right hand man and successor. Di Giacomo asks “How are things in our neighborhood?” “There are blacks there”, his brother answers. “What kind?” Giovanni delves deeper. “Nigerians”, Giuseppe specifies. “But they’re respectful. They wait for me outside my house to talk, and before doing anything they always ask for permission.” 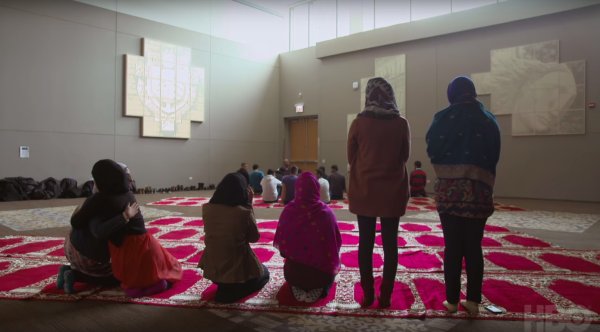 Exclusive: Watch the Trailer for HBO's Jihadi Documentary Homegrown
Next Up: Editor's Pick