A view of Kylo Ren on display as part of a Star Wars themed holiday window at Bloomingdale's 59th Street Store on November 26, 2015 in New York City.
Cindy Ord/Getty Images
By TIME Staff

Michael Kaplan, the costume designer for Star Wars: The Force Awakens, recently spoke to TIME about coming up with the costumes newest film in the fantasy franchise. He revealed the extensive amount of thought that goes into every detail of each piece and how deeply involved director J.J. Abrams was in the process.

TIME: What was it like working with J.J.? Did he get involved with the costume design?

Kaplan: Oh yeah. He’s always had an influence and he really has always cared about what we’ve been doing in the design process. But I have to say that on Star Wars he was different. He was much more involved in the mix at every single stage, very hands on. He even once asked me where I was planning on putting a seam in a costume which really made me laugh. I mean no director has ever asked me that before. This film I know is very important to him. Not because it’s a big Hollywood movie, but because of what it meant to him when he was young, when he first saw it, and he wanted to get it right and his involvement was constant. And not only in my department, but you know in every department. He always creates a very creative and fun atmosphere in which to work and he likes everyone to be included, everyone to be heard and everyone is respected. He’s pretty incredible. The work environment that he sets up is one that I think people really flourish in.

One of the things I think makes the Star Wars universe feel so real is you can see things sort of like scuffed up and dirty and not necessarily kind of mint and box. Were the costumes like that? Are the costumes distressed at all?

Totally, we have a whole distressing department and J.J. loved that. There’s nothing better to bring you into the world of believability than when clothes look like they’ve been worn quite a bit and are all broken down and their shoes have mud on them. You won’t see brand new soles running through a scene or when a character puts his feet up. It’s not a fashion show and it’s almost like these people have been wearing these costumes forever.

One of the amazing thing about the original trilogy was Darth Vader, whose face you basically never see, he’s got this mask which has become so iconic and it sort of did a lot of acting for him, that mask. I’m curious about Kylo Ren — who’s one of the characters I’ve been able to see images of — he’s got a full face mask for part of the movie at least. How did you go about creating that mask?

We came up with so many different looks for Kylo. I mean it was crazy. J.J. kept saying he’ll know when he sees it and one day we were having a discussion and he was talking about wanting it to be something that a child would remember, you know, that would be indelible in a child’s mind, and one of my concept artists came up with that image. I don’t know where he got it but he heard something that a child would like, and I don’t know if it was the kind of spaghetti type lines on it or what, but the next time J.J. came by that was what we presented to him and he loved it. Also the silver in those lines kind of reflects and changes color with the action. You know, if he’s standing in front of fire you see that, so it almost brings you into the mask. 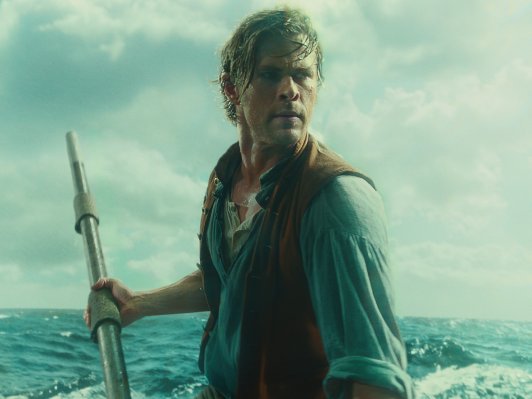 The True History of Cannibalism Behind 'In the Heart of the Sea'
Next Up: Editor's Pick