On a chilly Utah morning in November, dozens of protesters stood outside of a federal land authority field office in Salt Lake City to decry the auction of government lands for the purpose of oil and gas drilling. As demonstrators chanted “keep it in the ground”—the new rallying cry of the more liberal activists in the environmental movement—officials at the Bureau of Land Management (BLM) field office postponed the auction.

Now, as negotiators from around the world gather in Paris to hammer away at what they hope will be the world’s most significant agreement to reduce greenhouse gas emissions, activists are gearing up to fight another land auction next week, this time by rallying in Washington, D.C. Extracting fuel from thousands of additional acres of federal land would do irreversible damage to the climate, they say. World leaders in Paris are debating just how ambitious an international climate deal should be, but even the strongest accord wouldn’t come close to stopping routine drilling in the U.S. And it’s clear that whatever deal emerges in Paris will not be enough for these activists.

“Paris for us occurs within a context of a growing social movement,” said protest organizer Jason Kowalski, policy director at the climate advocacy group 350.org. “If it’s wrong to wreck the climate, it’s wrong for our government to be selling these fossil fuels to industry, auctioning them off to the highest bidder.”

MORE Environmental Activists Prepare for Next Fight After Keystone Victory

The victory in Utah would have been unthinkable just a few years ago, but activists have buckled down with new resolve following President Obama’s decision to reject the Keystone XL pipeline. In his speech, Obama said, “we’re going to have to keep some fossil fuels in the ground rather than burn them.” Activists now use Obama’s statement as ammunition behind the argument that any new drilling in the U.S. amounts to hypocrisy. Obama could stop the auctions with a simple executive action, they say.

Science supports activists’ position that some fossil fuels need to be left in the ground to keep global temperatures from rising by more than 2°C. The Earth may face catastrophic changes to sea levels, food supplies and weather patterns if global warming exceeds that threshold, climate scientists say.

Burning of fossil fuels needs to be limited to keep warming below that threshold, but research doesn’t suggest that drilling needs to be stopped cold. Current fossil fuel reserves across the globe total three times the level that could be burned while reasonably expecting not to exceed that threshold, according to a study published last year in the journal Nature. In total, a third of remaining oil reserves, half of gas reserves and 80% of coal reserves should remain unused, the study found.

Still, keeping some fossil fuels in the ground doesn’t mean halting all new oil and gas drilling. Climate activists acknowledge this point but argue that decisions made today will lead to drilling that may continue decades into the future. “This doesn’t mean turning the lights off tomorrow. it means an end to 30, 50 year decisions to allow drilling,” said Kowalski.

A dramatic shift in direction from Obama seems unlikely, despite optimism from activists. The President has maintained consistent support for continued reliance on fossil fuels as the U.S. transitions to renewable energy sources. Even in his speech announcing the rejection of the Keystone XL pipeline, Obama played down the impact of that any given pipeline or drilling project on climate change. Keystone was “neither a silver bullet” nor “the express lane to climate disaster,” he said.

Land auctions play a routine role in federal energy policy. BLM officials have held more than 20 auctions this year and sold the right to drill on more than 500,000 acres. Less than 5,000 acres are up for auction next week. But the auction is just a start for climate activists.

“Moving forward it’s going to be very difficult for any fossil fuel project to move forward without opposition,” Benjamin Schreiber, a director at Friends of the Earth, said last month. “We have new metric: if a project worsens climate change, we shouldn’t be approving it.”

MORE What to Know About the Paris Climate Change Conference 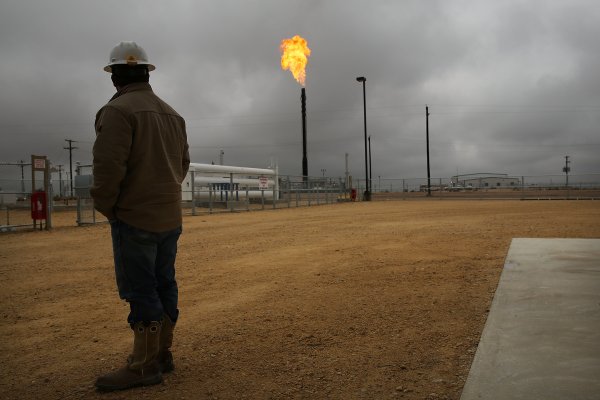 U.S. Must Repent of the Sins of Fossil Fuels
Next Up: Editor's Pick