The Photo Collective Makes Its Comeback

The traditional blanket toss at the annual whaling feast in Point Hope, Alaska on June 16, 2015.
Katie Orlinsky
By Rachel Lowry

The changes at the photographer-run agency Luceo in 2012 were unexpected, if not swift. After issuing a press release announcing its redesigned website, three of its six founding members announced their resignation to “pursue personal endeavors.” It followed Oeil Public’s demise in 2010, forcing the photographic industry to wonder if it marked the end of the photographer-run model. But with the recent growth of Prime and Boreal, the collective seems to be making a comeback.

Both collectives have announced on Dec. 2 that they will be taking on new members – Christian Rodriguez and Katie Orlinsky will join Prime’s now eight-person team, while Daniella Zalcman and Annie Flanagan will become members 11 and 12 of the Boreal Collective.

“I guess the secret’s out,” says Flanagan. “I have had a huge crush on Boreal for a while now. I am constantly impressed by the sensitive yet striking nature of the photography they are putting out, their commitment to long form documentary projects and their creative approach to sharing and making work.”

Luceo’s photographers voiced one hitch in the agency model: time management. Without paid staffers to carry the load of administrative work, the photographers were bogged down by business details that require attention and upkeep. The collective dispersed, but not to be forgotten by its unflinching successors, who have determined to learn from their experiences. Despite the proven risks of the model, Flanagan, Zalcman, Rodriguez and Orlinsky are among many photographers sidestepping the traditional photojournalism agency route to join smaller and younger collectives (Boreal is just five years old, while Prime launched in 2011) around the world.

While their humanitarian focus fits the broadest and most relevant demand in news today, it’s more than just a business model. Boreal has worked to be a starting point for grassroots exhibitions, educational events, publishing initiatives and artistic collaborations. Prime, too, claims its work is an attempt to “describe the human experience with empathy and artistry.” But in light of Luceo’s changes, both collectives remain careful. Prime has always approached growth cautiously, Prime’s Brendan Hoffman says. “It’s a delicate balance to maintain the necessary levels of trust and engagement within the group, so adding new members is not a decision we take lightly.”

Prime recently hired a coordinator, Lori Waselchuk, to backstop some of their bigger initiatives. “[It] is much more sustainable when we’re able to divide her pay between more photographers,” he says.

In making the decision, they felt that with eight members they could still maintain the family-like atmosphere. “But there is a practical limit and we don’t know exactly where that is,” Hoffman says. “One of our big debates was whether to add more than two new photographers or whether to see where we are as a group in several years, at which point perhaps we would make a different decision about how to grow and get even stronger. We opted for the latter.”

There are many reasons a photographer might opt for a collective. For Orlinsky, who recently became represented by Levine/Leavitt, the collective allows her to continue her own editorial assignments with clients she has worked with for years. For Rodriguez, a Uruguayan photographer who has captured everything from teenage mothers to circus performers in Vietnam, the collective offers the “fresh gaze” he needs to make a living as a photographer, “not just because your work has greater visibility, but also because you learn from your partners,” he says.

All agree that the greatest benefit of the collective is its communal conscience. It’s part of a growing trend among photographers to rally together in an industry that is fiercely individualistic and competitive. “I’ll go off on my own shooting personal projects and get lost in the work, which can be good in a lot of ways, but it’s isolating,” Orlinsky says. “Knowing what all the other photographers in a group like Prime are up to, what everyone’s thinking about, it makes you feel supported and connected.”

Both Prime and Boreal are focused on rethinking creation and delivery of photography. “At a time when the photographic industry is being dismantled,” Boreal writes on its website. “[We] seek to rise to the challenge of taking an active role in its redefinition.”

Hoffman agrees. “We critique each other’s work and ideas, give business advice, and market ourselves collectively as a cost-saving way to stay on editors’ minds. But we’re evolving beyond that as all of us become more experienced and as our interests grow beyond the basics. We’re more focused now on fundamentally rethinking how to connect with audiences in an engaging way, the role of photography in trans-media projects, and new funding models for producing long-form work.”

Correction: The original version of this story incorrectly described the status of the Luceo collective. It underwent a restructuring in 2012 and continues to operate today as a creative visual agency. 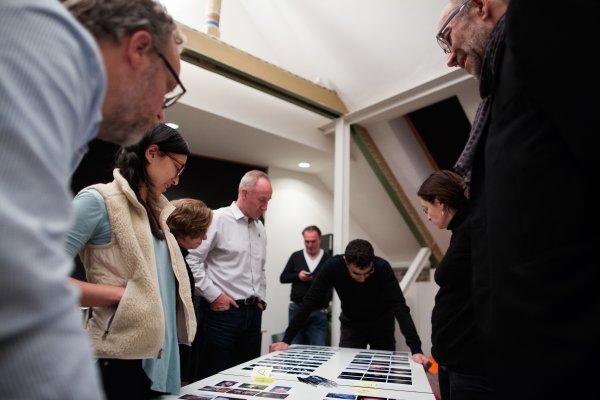