Behind the Scenes of TIME's Star Wars: The Force Awakens Photo Shoot

“The moment you meet BB-8, you build up some form of weird human connection,” says Marco Grob, who photographed the new Star Wars character for this week’s TIME cover. “It has one eye that has this really cute way of looking at you. It’s just incredible.”

“For me, Star Wars is much more than only a film,” Grob says. “Star Wars is hundreds of people who try to push the envelope. People who take enormous risks in creative and in technical aspects. They try to do things we’ve never seen before in a way nobody would have imagined to ever see before. And for me, it’s incredible.”

Vote Now: Which Star Wars Cover Is Your Favorite?

Grob says he didn’t get to see The Force Awakens before his sessions with the new members of the cast. In fact, he didn’t even watch the film’s popular trailers. “Sometimes it’s good not to know too much,” he says. “I wanted to have a feel on its own, to kind of do my own thing [instead of] being influenced by anything I would have seen.”

But when it came to Harrison Ford, Carrie Fisher and Mark Hamill, the situation was, of course, different. “I grew up with them,” he says. The same goes for R2-D2. “You get almost star-struck when you meet R2-D2. It’s incredible when you see it getting unwrapped. It was certainly one for the books. Something I’ll never forget.”

After the two-week shoot in four cities across three countries, Grob will see The Force Awakens like the rest of us, when it’s released in theaters in two weeks—but that fine by him. “[I’ll be] like some kid with a bag of popcorn,” he says, “sitting there and enjoying it.” 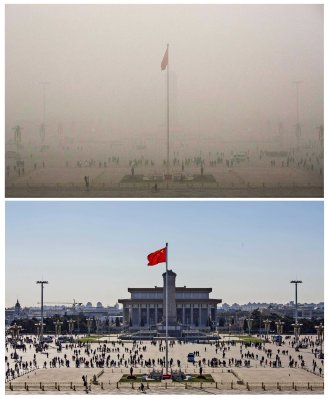 See Beijing With and Without Smog
Next Up: Editor's Pick