Sitting around watching TV and not doing any physical activity as a young adult may be linked to lower brain functioning even earlier than scientists had thought, according to a new study.

Researchers at the Northern California Institute for Research and Education analyzed data from a 25-year-long study of more than 3,200 18-to 30-year-olds. Those who reported watching the most TV (usually more than three hours a day) and doing the least physical activity (usually less than two and half hours a week) had the worst cognitive functioning, even before the participants were middle-aged.

“[This inactivity] affects cognitive functioning even younger than we realized,” says one of the researchers, Tina Hoang. She and her co-authors, including Dr. Kristine Yaffe, professor at University of California, San Francisco, School of Medicine, found that people who watched a lot of TV and had low levels of physical activity had weaker working memories, slower processing speed and worse executive function (ability to plan and complete tasks) than their peers, even adjusting for education. Their verbal memory, however, seemed to be unaffected.

“Participants with the least active patterns of behavior (i.e., both low physical activity and high television viewing time) were the most likely to have poor cognitive function,” says the study, which found that they were twice as likely to do poorly on tests of brain performance than their peers.

The researchers believe this is one of the first studies that demonstrates how bad the combination of lots of TV and no exercise could be even for the relatively young brain. Previous studies have shown that both inactivity and TV were linked to cognitive decline in later years, but had not looked at those who engaged in such behaviors while they were still young.

And since sedentary behaviors are increasing worldwide, as is time spent in front of screens, especially among the gamer generation, and Hoang hopes to further study the link between the two. “We’d really like to consider different types of screen behavior,” she says, including time spent using computers, videogames and handheld screens.

The researchers believe it’s possible that exercise leads to greater neurogenesis—the development of nervous tissue, as well as more synaptic plasticity—the ability of the brain’s neural pathways to keep changing and growing. It’s also possible some TV may be worse for cognitive impairment than others.

But the study’s results are not conclusive. It could be that those who have low cognitive functioning are more likely to sit around and watch a lot of TV. Or that a lot of TV and no moving around lead to some other condition, such as poor heart health, inflammation, obesity or depression, which might be affecting the brain’s performance. Or even that those with high cognitive functioning are more likely to tell researchers what they want to hear, which is that they do a lot of exercise and don’t want much TV.

But if it’s true that unhealthy behaviors in early adulthood may already have an impact on middle age brains, then young adults are a good target for programs aimed at improving cognitive health in later years. Hey, Millennials! You gotta get off the couch. 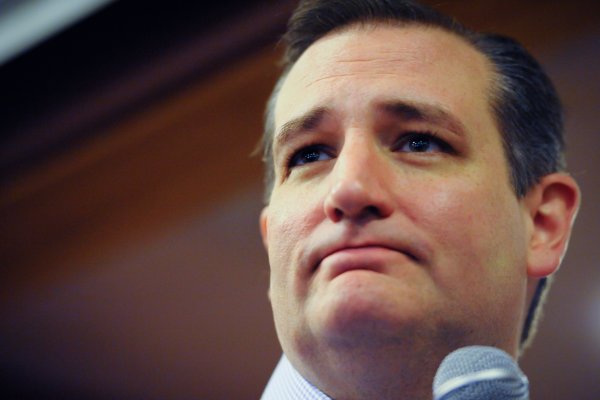 The Real Truth Behind Ted Cruz’s 'Condom Police' Joke
Next Up: Editor's Pick