Ideas
By Chuck Hagel
Chuck Hagel is a former Secretary of Defense.

It is remarkable that French security forces are taking on the international climate change conference in Paris in the shadow of the recent attacks. Then, the city reminded the world of the threat of terrorism. Now, it offers a promise for world leaders to address another national security challenge: climate change.

The agreement in Paris is expected to feature all countries voluntarily committing to reduce their emissions, and ensuring that their commitments are transparent and verifiable.

Almost two decades ago, in the lead up to 1997’s U.N. climate negotiations in Kyoto, the late Sen. Robert Byrd of West Virginia and I drafted a U.S. Senate resolution laying out conditions for the Senate to support an international agreement on greenhouse gas emissions: (1) that all nations must commit to limit greenhouse gas emissions, and (2) that any agreement should not cause “serious harm” to the American economy.

I led the Global Climate Change Observer Group to Kyoto, a bipartisan group that included Senators John Kerry, John Chafee, Joseph Lieberman and others. There, the Clinton administration ignored the Byrd-Hagel Resolution and signed the Kyoto Protocol in December 1997. President Bill Clinton never submitted the Kyoto Protocol to the Senate for ratification.

The Kyoto Protocol did not meet the conditions of Byrd-Hagel. Today, I believe that a Paris agreement could meet these conditions, laying out a path that is more realistic, effective and economically sound, and that would help catalyze a new global energy economy.

This is why, along with a bipartisan group of other former Secretaries of Defense and State and national security leaders, I recently signed a statement urging global cooperation on climate change. The statement said we must work to address these threats as a national security imperative. The military has defined climate change as a global threat multiplier that could exacerbate instigators of conflict such as resource disputes, ethnic tensions and economic discontent. Preparing for climate change is about risk—even if we do not understand every aspect of the scientific predictions, we know that the consequences of not acting may be significant.

In 2007, I authored bipartisan legislation, along with Senators Richard Durbin, Richard Lugar, Joseph Biden, Dianne Feinstein and Kerry, that directed the intelligence community to perform a National Intelligence Estimate of the threats of climate change. When the chairman of the National Intelligence Council testified about their assessment in 2008, he stated that climate change “will have wide-ranging implications for U.S. national security interests.” Senator John Warner authored similar legislation at the time, which I supported, directing the Department of Defense to identify and act on the threats of climate change.

While I was Secretary of Defense, we prioritized preparing for climate change as a national security issue. The 2014 Quadrennial Defense Review warned that climate change was a “threat multiplier,” identifying the specific risks to security we face from a changing climate. With Arctic sea ice melting faster as a result of climate change, we developed the Department of Defense’s first-ever Arctic strategy to ensure a secure and stable region where U.S. national interests are safeguarded, the U.S. homeland is protected, and nations are working cooperatively to address challenges. I announced this new strategy at the Halifax International Security Forum in November 2013.

U.S. leadership on climate change resulted in last year’s climate agreement with China. China has made impressive commitments on climate change, committing to peak their emissions and planning to install as much clean energy as the entire U.S. electricity system. China is already a world leader in renewable energy. India and Brazil have also shown commitment to climate issues, committing to significant clean energy goals. They know action is clearly in their self-interest.

Ahead of Paris, the United States has submitted a common-sense plan that is achievable under current law. We know that American innovation and technology can grow our GDP while reducing emissions.

As my Senate resolution co-author, Sen. Byrd, wrote in an op-ed shortly before his death: “The future of American industrial power and our economic ability to compete globally depends on our ability to advance energy technology.”

Congress should play an active role in the negotiations—not by blocking the deal, but by sending a new Global Climate Change Observer Group to report on the proceedings in Paris and closely evaluate other countries’ climate plans. Strong oversight is necessary to ensure that other countries are meeting their commitments. In addition, Congress should work with the President to develop policies that will position America to lead on clean energy.

The Kyoto Protocol did not meet the Senate-passed requirements of the Byrd-Hagel resolution. The U.S. has an opportunity to help make the Paris Climate Change Agreement meet the conditions that will deserve the support of Congress and strengthen our country by bringing together a more unified global climate effort.

Chuck Hagel is a former Secretary of Defense. 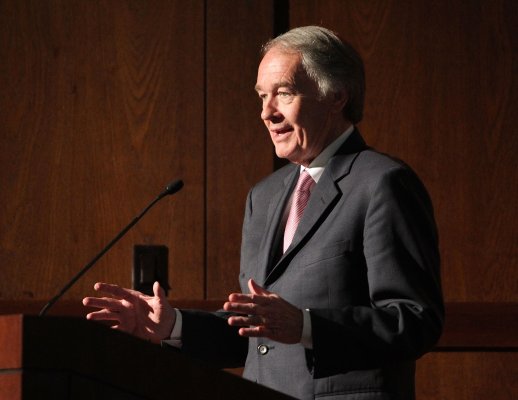 A Turning Point on Climate Change
Next Up: Editor's Pick