With Star Wars: The Force Awakens only weeks away, fans are waiting with bated breath for the franchise’s first film in a decade — and they’re not the only ones who are anxious.

Director J.J. Abrams revealed Monday that he was “nervous beyond words” to show an early cut of the space fantasy to top brass at Disney, the studio that paid $4 billion to acquire Lucasfilm in 2012.

During an appearance on The Howard Stern Show, Abrams recalled, “We showed the first cut — which was still incomplete, a complete version of the movie but not the finished version — and we showed it to Alan Horn and Bob Iger and Alan Bergman, the three people at Disney who sat with me in the theater, and we screened the movie. And it was horrifying.”

Although Abrams was a nervous wreck over the movie’s unfinished visual effects, not to mention the high stakes, the execs responded favorably, granting the filmmaker what he called “the biggest relief of my life.”

The relief was short-lived, of course. “I left and all I could think was, ‘What do they know, they spent $4 billion, they have to love it,’” Abrams added. “Their response was so kind, I’m like, ‘They’re just being nice.’”

Over the course of the Stern interview, Abrams also defended Star Wars creator George Lucas (who was not involved in the new film), addressed the controversy surrounding John Boyega’s casting, and talked about screening The Force Awakens for the terminally ill fan Daniel Fleetwood. 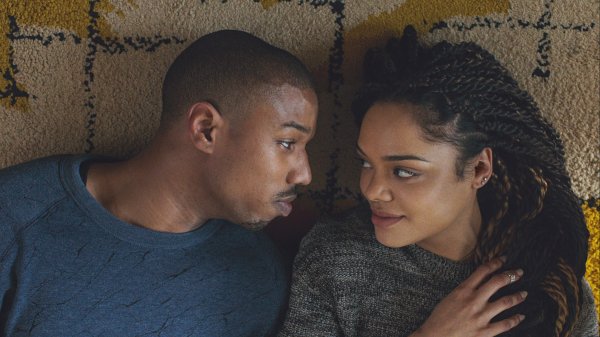 Creed's Tessa Thompson on Why She's More Than Just a Cliché Movie Girlfriend
Next Up: Editor's Pick