Democratic presidential candidate Bernie Sanders continues to enjoy a healthy lead in TIME’s Person of the Year poll with just a few days of voting left.

As of Monday evening, the Vermont Senator had 10.4% of the vote in the reader poll, down slightly from last week but still well ahead of Malala Yousafzai, who is in second place at 5.3%. And he far outpaces other presidential candidates, including Republican Donald Trump (2.1%) and Democratic rival Hillary Clinton (1.4%).

Voting on the readers’ choice poll ends Dec. 4 at 11:59 p.m., and the winner of the poll will be announced Dec. 7. While American political figures from John F. Kennedy to Jimmy Carter to Ronald Reagan have been recognized as Man of Year after winning the White House (the issue changed to Person of the Year in 1999), no presidential candidate has been named Person of the Year prior to the end of the campaign.

TIME’s editors will choose the Person of the Year, the person TIME believes most influenced the news this year for better or worse, but that doesn’t mean readers shouldn’t have their say. Cast your vote here. 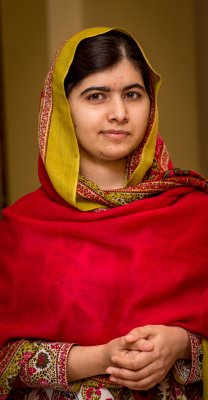 Malala Leads World Figures in TIME Person of the Year Poll
Next Up: Editor's Pick