The history of innovation in the United States—from the Space Race to cell phones—shows that technological advances do not occur smoothly. Incremental improvements over time get periodic boosts from technology or policy incentives.

The solutions to climate change are no different. Our progress towards clean energy was slow in the past but has been breathtakingly fast during the past decade, with prices plummeting in recent years. In 2005, we installed 79 megawatts of solar in the U.S. Last year, we deployed nearly 100 times that amount—7,200 megawatts. Policy can help catalyze those shifts, rapidly quickening the pace of technological progress. And as delegates from 196 nations gather in Paris this week to negotiate a new global agreement on climate change, it is a moment that dramatically accelerates that progress.

By bringing together all the nations of the world and encouraging them to commit to do their fair share, the Paris talks could succeed where past attempts have failed. We now have the opportunity to forge a truly global solution to global warming. And years of U.S. diplomatic efforts with rising economies like China and India have primed the clean energy pump. China, for example, will install more than twice as much solar power as the U.S. this year.

Now is not the time for the U.S. to sit back and rest. We need to work hard to continue our leadership. The Clean Power Plan is a historic step toward a clean energy economy. But even before its implementation, coal use is declining, having dropped 7% from 2014 to 2015 alone. Cleaner fuels are increasingly the preferred choice. This transition shows that we’re serious about tackling fossil fuel emissions, inspiring the confidence in our allies that when they act on climate, they won’t be acting alone.

This is vital. While every nation has its own challenges, we only have one climate. No country can escape its changes, and no country can protect it on its own. In Paris, we have the opportunity to choose a path that leads to a world where we no longer sacrifice the health and safety of many for the profits of the few. By working together, we will make our children and grandchildren proud, leaving them a cleaner and safer future.

Nevertheless, there are critics of the emerging agreement. Some are concerned it will be too weak. To them I say that we have to start somewhere. By bringing more than 170 countries to the table with their best efforts already, we will begin to protect our climate by transitioning to a clean energy economy. For the first time both developed and developing countries are pledging action, an amazing accomplishment that will be long remembered as a turning point for protecting our climate.

Other critics claim that any efforts to reduce emissions means tanking the economy. But they are wrong. The fact that the world economy grew in 2014 while global carbon emissions shrank is clear evidence that we can reduce pollution while still growing the economy. In Massachusetts our state-wide carbon pollution is 16% lower than it was 25 years ago, even as our economy has grown 70% since 1990.

We all recognize that preventing the worst of climate change will not be an easy task. But that doesn’t mean it’s impossible. America has always led on great challenges, and climate change is no exception. More than 70% of Americans say that it is important to reach an agreement in Paris. Similar percentages of Americans support more emphasis on using wind and solar to power our country. In Paris we have the opportunity to meet the climate challenge and deploy the technologies to save the world—literally—while also strengthening our economy and creating jobs.

Paris isn’t the end of the road. All countries, individually and collectively, will need to do more in the future. But it can provide the powerful catalyst to bring about the changes in our energy system that we do want and to end the changes to the climate system that we don’t. 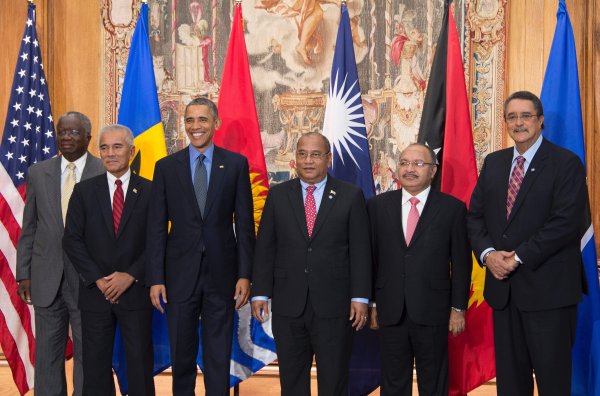