Tessa Thompson’s character in Creed, Bianca, is not your average sports movie girlfriend. An ambitious singer, Bianca has bigger plans than just propping up her love interest, Rocky Balboa boxing apprentice Adonis Creed (Michael B. Jordan). Thompson, fresh off critically acclaimed performances in Dear White People and Selma, talked to TIME about the movie’s millennial romance, writing music for the film and how roles for women are changing in Hollywood.

TIME: What convinced you that this revival would be worth it?

Thompson: I was interested in the film before I knew anything about it apart from it was the next film by Ryan Coogler. I was such a fan of Fruitvale Station, and I had a chance to meet him very briefly at Sundance one year and just became a fan of him personally. And so when I heard he was making a film called Creed, I just said I want to be in that film without knowing what it is actually about. And then when I found that there was something in it for me to play this singer, I became interested in the character.

The world of Rocky wasn’t something I thought about very much, but what I thought was unique about this revisiting of this franchise is that it was told from Ryan’s perspective with ideas that were very personal to him. It was something that he wrote after his father was sick, and he was sort of thinking about what happens when a hero or at least a hero in your mind has fallen for a moment, what that looks like both for the hero and the person watching it. And I just thought it was so unique. And for my money, I think if you’re going to continue a franchise, you better have a really compelling reason to do it. So I thought he really had one, and it was a chance to bring something really fresh and new to this story that’s such a rich part of American film iconography.

What had your relationships been with those movies been before you signed on to do the film?

I didn’t have much of one. Unlike Ryan—he grew up in a family that was really enthusiastic about sports. He was an athlete himself, so his father sat him down to watch Rocky II before games for example. I come from the least sports-oriented family maybe ever. So I had the relationship that I think most people unless they grow up Rocky fans have with it, which is it’s something that you’re sort of familiar with if someone were to hum, “duh duh duh duh duh duh,” you know what that means, or if someone screams, “Adrien!” you know what that means—that sort of burning love. So it was stunning to me the way in which once I was cast I realized the movie had had an impact on me.

And for me that was really useful in the sense that I didn’t think of myself when I made the movie as Adrian 2015. But it really felt like a Ryan Coogler movie about a young boxer in Philadelphia.

Part of what I really liked about the film is that it felt like your character had her own life, her own ambitions. There could have been a separate movie entirely about her, which is rare in sports movies.

Yeah, so often you see the woman who doesn’t have her own identity—doesn’t stand to challenge the male character, just stands to be a pillar of strength for him. And I think it was really important to Ryan that Bianca be someone who really is her own person and that she sophisticates the movie because of that. He felt that otherwise he was in danger of making a movie that everyone has seen before because all the characters you kind of understand, and there are troupes you can kind of relate to and have seen.

And the fact that she was a singer was great for me because it presented the challenge of writing the music. Ryan loves to work in a really authentic space, so whoever was going to play Bianca was also going to make the music that she makes in the film. So that was something that was really incredible for me to do.

How did you balance preparing for the film and creating the music?

So I started right away. And I had two weeks to spend with Ludwig Göransson who is a really talented, not just a composer for the film but also a music producer—he’s made all the Childish Gambino records. We basically had the space of two weeks to create the voice of this musician who had spent her whole life cultivating her voice. And Ryan had some specific ideas about the musical influences. He kind of wanted to speak about this new genre, kind of R&B but in an experimental state. And he was really interested in talking about the other thing that seems to be happening in music where because people have access to home studios they can make this sort of bedroom pop music on their own and have their own agency to self-release and build a following on YouTube and social media platforms. And we’re both really inspired by people that do that.

Did you feel there was pressure to live up to the first Rocky film?

Yes, but I think that was a pressure that Ryan met with excitement because it means that he got to come here to Philly and do a lot of research. He was literally sending me photographs of girls whose picture he would take on the street, that were dressed in a way he could see Bianca in or giving off a sort of energy or something behind their eyes that looked like her—that had a hardness but sort of an innocence to it. So I think that was a challenge that he was excited about.

But as far as the franchise, I think we really approached it like a singular thing, as a new film. With all due respect to the legacy of the Rocky movies, I think we were really endeavoring to make something fresh.

I thought the relationship in the film was very sweet and also very realistic. It’s not the kind of relationship you see in sports movies that often.

We were interested in what millenial love looks like in the sense that I think our ideas about family and how to orient ourselves in relationships has become more sort of fluid. I think young people are trying to navigate how to have partnership but also how to pursue their dreams. I don’t think there’s this sort of standard idea of what a timeline looks like in terms of how a relationship will go. So I think for us we were really interested in the challenges that that presents when you get two people who are really after something individually but also really love each other what complications that brings in.

But there were definitely moments—I remember when we were shooting this bedroom scene for example—I remember getting through a couple takes and it felt really good between us. I remember getting through a couple takes of that bedroom scene, and I felt like, “Are we making a studio film?” Because it felt just very honest and very simple and not like the part where the music swells. It didn’t feel overly written. It just felt like two good friends at that particular moment talking. In that way it felt sort of daring.

In the past year, you’ve starred in Dear White People and Selma, both of which addressed issues of race and gender. Do you look for projects that are concerned with those topics?

I think right now I’m a glutton for doing all projects for myself—or at least trying to find the happy medium of both things. I feel like I was able to strike that balance with doing this film, for example. But it started with the filmmaker. And when you’re working with filmmakers who are always interested in telling stories through a unique lens, then they’re going to bring that energy to whatever project they do. And Ryan is a socially conscious person who wants to talk about gender politics and race because I think, like me, he feels like if you’re making work how can it not reflect the times that you live in and how you feel about it.

So I think I am attracted to projects like that, but I’m not precious. I’m interested in doing anything that excites me and challenges me. So it’s just about finding the things that interest you, but I do think we’re in a time where talking about gender and race is something that people are interested in doing or how we live in the future because we live in times where there’s a lot of challenges in all these spaces. So I’m definitely interested in telling stories that help us figure out better ways to be and better ways to see for sure.

I feel like it’s changing. The kind of projects that pass my way in the last five years I feel like have changed monumentally. Unfortunately Hollywood is a beast that measures where it’s going based on what’s worked previously, on what their successes are. So I think we need to move past that, but to that extent there have been a lot of things that have shown us recently that stories from people of color, like Empire, and stories from the female perspective not only are important for us socially, but they also make money. There’s a big audience for them.

So I don’t feel like there’s a scarcity of voices. There’s maybe a scarcity of opportunities, but I feel like that’s ever-evolving and changing. And as far as finding those kinds of filmmakers, I’ve lucked into it I think recently, but it’s also birds of a feather. More and more when I’m sort of out and about and meet people at parties, you realize people who think alike create a camaraderie.

So hopefully what happens in that space is people get together and just decide to fill that void that they see, which is why I’m super inspired by Jennifer Lawrence, for example, making a movie with Amy Schumer, which happens because they met and really hit it off and maybe Jennifer goes, “I’m coming from this dramatic place and I want to show people I’m richer than that and can be funny.” And we need to make work for women where they really get to play together and tell their stories and have agency over it. And so instead of looking at the scarcity, I think I just look at where the opportunities are. And go like okay if these stories aren’t being told then who else wants to tell them. 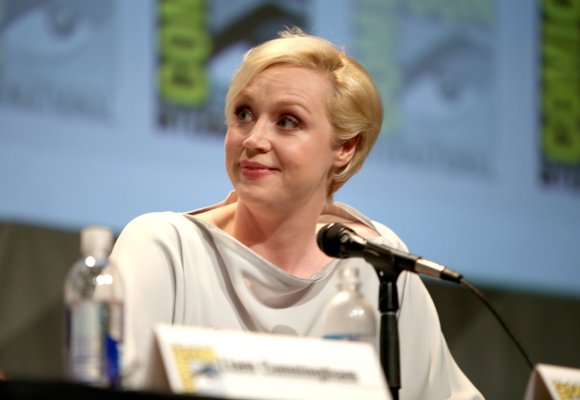 How Gwendoline Christie Fought for a Role in Star Wars
Next Up: Editor's Pick