Whenever anyone speaks of “new atheists,” my stomach churns. It’s hard not to think of a clique of educated white men of a certain age congratulating themselves on their intellectual superiority over the benighted fools around them. The “newness” of these atheists neatly captures the Whiggish conception of history that Richard Dawkins in particular has espoused, imagined in terms of progress out of a primitive, superstitious past towards a glisteningly rational future. You don’t have to scratch the surface very hard to expose the western-centredness of this kind of discourse.

The “new atheism” shtick has also been embraced by its opponents. For many on the religious side of the fence, atheism is not a triumph of the modern West but a symptom of its pathological decadence, its slide from pious observance into secular, mechanized, capitalized doubt. In other words, it suits both sides to promote the fiction that atheism is something invented in recent times by the West.

Atheism is certainly not limited to the West – as the murder of four Bangladeshi bloggers in 2015 has brutally reminded us. Of course, some will see this as another sign (whether benign or diabolical) of the spread of western influence throughout our interconnected world. But this doesn’t tell the whole story. What campaigners like Ayaan Hirsi Ali have emphasised is that the dissidents have been there all along; web-based communication has simply given them new opportunities for expression and wider audiences.

Nor is atheism limited to modernity. I am often reminded, when I read of “new” atheism, of the words of the Athenian stranger in Plato’s final work, The Laws. Plato was deeply hostile to atheism, and presents his Athenian legislating against those who disbelieve in gods, in their ability to affect our world, or in the efficacy of religious institutions. Turning to address an imaginary young atheist, he expostulates that “You and your friends are not the first to have held this view about the gods! There are always those who suffer from this illness, in greater or lesser numbers.” Atheism is not of course an “illness,” but I do think that Plato was basically right, in that across all cultures and all time there have been those – in greater or lesser numbers – who have disbelieved in gods.

My own area of expertise is in the culture and thought of ancient Greece. But mine is not a Greece that slots in neatly at the beginning of a Euramerican story of the rise of western rationality. The Greeks weren’t “western” in any meaningful sense: they had much more in common with their near-neighbors in what we now call Turkey, Egypt, and Syria, Iraq and Iran than Germany, France, Spain or Britain. Of course the modern West has often claimed them as ancestors, but we would do well to remember their influence on the medieval Muslim intellectual tradition, as well as other middle-eastern peoples from the Druze to the Yazidi (as Gerard Russell’s recent book has argued).

The Greeks offer (along with the Chinese) our best opportunity to test just how “modern” our ideas are, because they are by some distance the best-attested ancient culture: not only do we have huge amounts of incredibly diverse text, archaeology, art, inscription and so forth, from over 1,000 years of antiquity, and thousands of square miles; but that material can also, often, be located in relatively precise date-ranges and geographical contexts.

When you scour the Greek material for signs of atheism, as I have done, you uncover an extraordinarily rich mosaic of people and ideas. The word atheos is Greek, and seems to have first been used in our sense in the fifth century BCE, in Classical Athens. The roots of the idea, however, lie earlier. The first Greek philosophers, known as the Presocratics (sixth-fifth century BCE), further challenged conventional divine privilege. Xenophanes of Colophon famously ridiculed the anthropomorphic projections of human religion: if every different ethnic society imagines the gods look like them, how can they all be right? If cows and horses had hands, they would depict gods as cows and horses … Most Presocratics gave some sort of role for the gods, but usually only in the sense of “nature,” the force that animates organic growth and the motions of the stars. At least one, however, Hippo of Samos, went all the way and argued for an entirely material world without any deity.

In fifth-century Athens, some of the itinerant travellers known as “sophists” attacked belief in the divine. Protagoras pointed out that you cannot claim to know anything at all about the gods, as they lie (if they exist) beyond the realm of perception. Democritus of Abdera said that conventional religion emerged from primitive people’s fear of natural phenomena like lightning, the physical nature of which they didn’t understand. Prodicus of Ceos claimed that what we now call gods were originally just names for things that are needed for human life, like bread (Demeter) and wine (Dionysus). One author who may be the tyrant Critias argues that religion was the invention of a cunning politician who wanted to persuade a lawless populace that they were being watched by gods, and would be punished.

The enemies of such theorists gave them the name atheos, or “godless.” At some point in the fifth century, however, the word seems to have been reappropriated as a positive term. My own view is that the key figure here was Diagoras of Melos, antiquity’s premier celebrity atheist, but unfortunately a rather shadowy figure now. (He seems to have had a better sense of humor than many of his modern peers. According to a story sometimes told about him, when a friend showed him all of the temple dedications put up by those who had survived storms at sea after praying, he replied: “How many more dedications there would be if those who hadn’t survived put them up too!”) Diagoras, I think, probably imagined himself as a latter-day Bellerophon, soaring up into the heavens to besiege the gates of Olympus, but using philosophical arguments to disprove their existence rather than the flying horse Pegasus. He probably gave center stage to what we now call the “argument from evil”: if the gods are all-powerful and benevolent, why does wickedness go unpunished?

Over time, Greek thinkers developed a huge stock of atheist arguments, even if their nature changed in response to new political circumstances. But how exceptional were the Greeks in this respect? When assessing ancient cultures we are always dealing with what Martin Bernal used to call “competitive plausibilities” rather than certainties. My own view is that Greek atheists benefited from an absence of sacred scripture, and from the relatively circumscribed power of the priesthood. Religious doctrine and dogma were thus not systematically enforced, at least until the Roman period. Discussions with colleagues in Egyptian, Israelite and indeed Chinese studies, however, have persuaded me that similar anxieties about the existence and influence of the gods were probably widespread across the ancient world, even if the evidence is often sparser.

Atheism certainly varies in nature and intensity across time and space, and also (as Plato reminds us) in the “greater or lesser numbers” of its adherents. But it is always there, in some guise; and the sooner we stop fooling ourselves that it is “new,” the better.

Tim Whitmarsh is A.G. Leventis Professor of Greek Culture, University of Cambridge. His latest book is Battling the Gods: Atheism in the Ancient World is published by Knopf in November, and by Faber and Faber (in the UK) in February. You can find him on Twitter: @Twhittermarsh 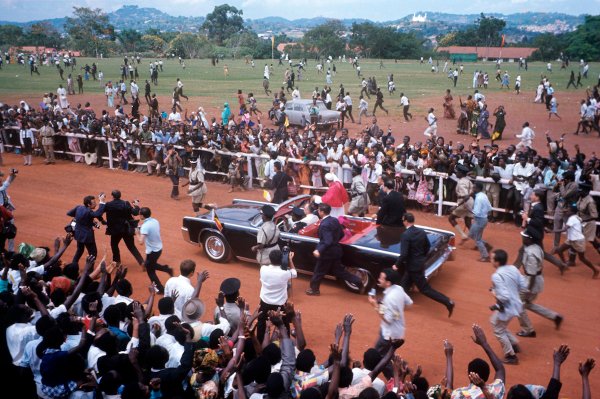 How Pope Francis' Trip Retraces the First Papal Visit to Africa
Next Up: Editor's Pick