Microsoft released a video late Monday introducing the world to Satya Nadella, a 46-year-old who has been at the company for 22 years and is the man chosen to lead after Steve Ballmer’s exit.

“The one thing that I would say that defines me is I love to learn,” Nadella said in his first interview as Microsoft’s chief. (He will be the technology giant’s third CEO ever.) “I get excited about new things. I buy more books than I read or finish.”

The appointment of Nadella, a native of Hyderabad, India, makes him the most powerful Indian-born tech executive in the world, according to Reuters. It also ends a months-long search that reportedly included such high-profile executives as Ford CEO Alan Mulally and former Nokia CEO Stephen Elop.

Nadella ran Microsoft’s Cloud and Enterprise group, where he was responsible for the firm’s ambitious “Cloud OS” effort to move software and storage from on-site computers to the Internet. Previously, Nadella was president of Microsoft’s $19 billion Server and Tools Business, where he’s credited with spearheading the company’s push toward cloud-computing. Over the last two decades Nadella has worked closely with Ballmer and Microsoft co-founder Bill Gates.

Now Nadella faces a stark set of challenges. Microsoft has struggled to keep up with Apple and Google in the booming mobile market. Despite pouring billions of dollars into mobile software and gadgets like the Surface tablet, the company has not been able to find a formula to compete successfully with Cupertino and Mountain View. Last fall, Microsoft announced a $7.2 billion deal to buy Nokia’s mobile phone business.

The latest U.S. mobile device and software market numbers underscore the uphill battle Microsoft faces. Microsoft’s mobile software accounts for a just 3.6% of the market, compared to 81% for Google’s Android platform and 12.9% for Apple’s iOS, according to research firm IDC. And Nokia is nowhere to be found on IDC’s list of the top global smart phone manufacturers, which is dominated by Samsung and Apple. 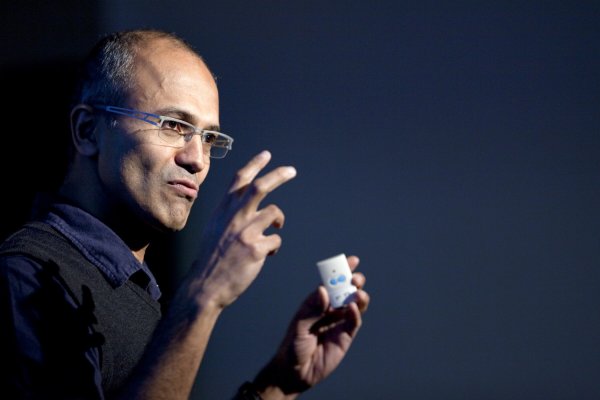 10 Things to Know About Satya Nadella, Microsoft's New CEO
Next Up: Editor's Pick