The Walking Dead: Did the Midseason Finale Satisfy?

The wall protecting the Alexandrians from the mass of zombies outside came tumbling down at the end of last week’s Walking Dead, meaning no good could come in Sunday’s season 6 midseason finale. The only question was: How bad would it get? Answer: plenty bad. And one major character would pay the ultimate price.

But the first casualty of the episode was Sam’s cookie, which was devoured not by zombies, but hungry ants. The action came fast and furious after that as the survivors all separated into different hiding spots — Carol and Morgan in one house, Rick, Carl, Michonne, an injured Deanna (who fell on a blade), Jessie, and more in another, Maggie up on a tower, Eugene, Rosita, and Tara in a garage.

The groups holed up and took stock of their situations, all of them precarious. Carol appeared to have a concussion due to a fall, poor Denise was stuck with the Wolf Morgan was keeping locked up, and Deanna discovered that in addition to her various wounds, there was a walker bite on her midsection. Her reaction? “Well, sh–.”

To make matters even worse, teen angst posterboy Ron locked Carl in the garage and tried to kill the son of the man who killed his father, but all it did was lead all the zombies right to them. Carl’s response was to take Ron’s gun and tell him his dad was an “a—hole.” (Tough, but fair.) Meanwhile, Glenn was dealing with his own angsty teen in Enid, who didn’t show a lot of interest in trying to save the community from the outside. Ugh, kids.

Not trusting Morgan, Carol made a run for it to see whom Morgan was keeping locked up. They faced off right in front of Morgan’s prisoner, with Morgan knocking out Carol, only to then be knocked out himself by the Wolf, who pulled his knife on Denise. Denise begged the Wolf to not kill them and “just let us die.” He took her as a hostage with their fate remaining unclear.

Meanwhile, down the street Rick told his group to cover themselves in zombie guts to make their escape (which, technically, they should probably do every single day, but whatever). Of course, there would be no escape for Deanna. Michonne came and offered to end it for her so she did not turn into a zombie, but Deanna said she was not ready yet and would do it herself when she was ready with her gun.

The group slowly made their way through the zombie-infested house, leaving Deanna to shoot and yell at the oncoming second floor herd as they survivors slowly inched their way through the community, although a panicky Sam calling out to his mom could undo their big plan. (And then we got a special prologue scene you can watch right here teasing infamous comic book villain Negan and what is to come when the show returns in 2016.) 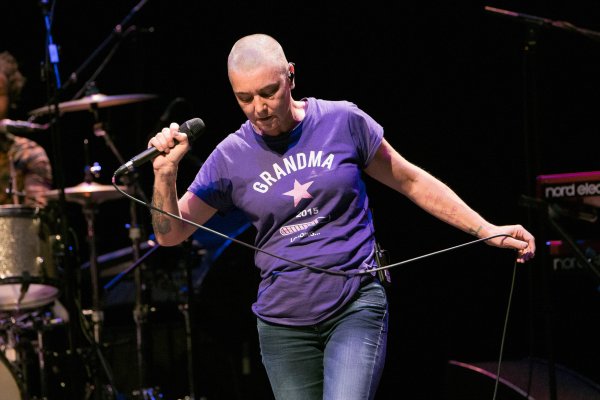