How Giant Tablets Could Be the Future of Television

Today’s televisions are smarter than ever. Thanks to on-board intelligence or devices like the Apple TV or Roku, TVs can, for the first time, run apps like Netflix or Amazon Instant Video. And these smart TVs are taking off: Research firm NPD Group predicts that there will be 231 million smart TVs (or dumb TVs connected to smart devices) by 2018, a growth rate of over 80%.

“The two largest drivers of growth will be the increased acceptance of connected televisions in the homes of U.S. consumers, as well as the continued adoption of streaming media players such as those offered by Google, Apple, Roku, and Amazon,” said NPD Executive Director John Buffone in a statement accompanying his firm’s report.

Another NPD analyst, Stephen Baker, has an interesting theory. He believes that, in the future, demand for big televisions will drop, despite all these new smart features. Why? Because Netflix and other video apps also run just fine on tablets, which are cheaper and more multi-purpose than giant TVs. The theory, then, is that people will buy one humongous television for their house, then rely on a tablet to watch TV shows and movies in other rooms.

Samsung, for one, is making at least a small bet on that future. Its new Samsung Galaxy View tablet measures a whopping 18.4 inches. That’s gigantic for a tablet. But Samsung is marketing the device as a “mobile TV,” a portable, high-definition screen you can take with you around the house. I’m already using a 13-inch tablet for a similar purpose, keeping it on my bedside table and using in lieu of a bedroom TV.

I believe Samsung is really on to something with the View, even if it’s not an immediate hit. People have used tablets and laptops to watch TV for years — but it’s almost never been a big focus of marketing campaigns, so it’s unclear how it will play out (Samsung also has an advantage in that it’s very familiar with the TV business). If the View is even mildly successful, it could launch a whole new category of giant tablets marketed as supplementary, mobile TVs.

With all the streaming apps we’ve got now, all you need is a good wi-fi connection to turn a tablet into a multimedia machine. The only big drawback right now is a general lack of access to live local content. But that should come soon, as more people cut the cord and force local stations to adopt the streaming future — and for now, there’s always Slingbox.

The mobile TV is an idea that’s time has come. People are already showing they’re willing to watch movies and television on tiny smartphone screens and regular tablets. But once those devices get even bigger, the multimedia experience will really take off. 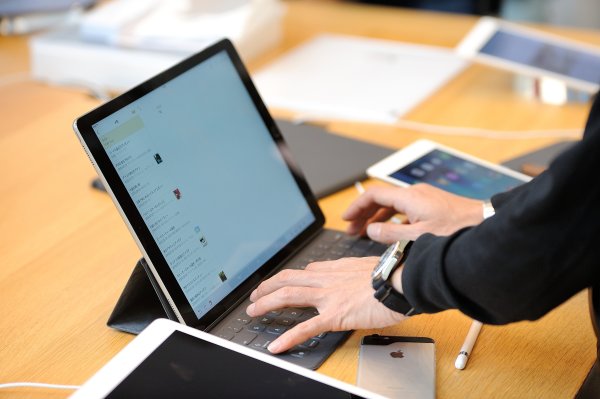 Why Apple's iPad Pro Is Different From Windows Tablets
Next Up: Editor's Pick