Hundreds of empty pairs of shoes dotted the streets of downtown Paris on Sunday, symbolizing the canceled march environmental activists had planned to hold before climate change talks beginning Monday.

Following the terrorist attacks in Paris, authorities cancelled the rallies that environmental advocacy groups had planned for Nov. 29 and Dec. 12 around the conference center. More than 140 world leaders will convene in Paris on Monday to begin the COP21 talks about global climate protection, with the two-week conference expected to draw over 40,000 attendees.

The canceled marches in support of strong measures to address global warming were only two of more than 50 marches and 2,000 worldwide events in total, according to French 350.org organizer Nicolas Haeringer.

But the two huge gatherings in the French capital posed a security risk in the weeks after the attacks that killed at least 129. The government made the decision “to avoid any extra risk,” said French Foreign Minister Laurent Fabius. The highly anticipated conference is proceeding with heightened security measures in the wake of the attacks. 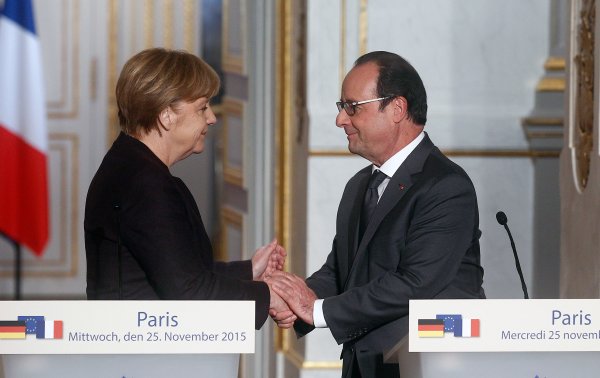 Watch Germany and France's Leaders Place Flowers at the Paris Memorial
Next Up: Editor's Pick