Donald Trump accused a New York Times journalist of “using his disability to grandstand” and denied mocking the reporter’s joint condition during a campaign rally in South Carolina on Tuesday.

Trump was widely criticized after he blasted Serge Kovaleski for his comments on an article he wrote after the 9/11 attacks for the Washington Post, which Trump had used to back up controversial claims that thousands of Muslims in New Jersey celebrated the collapse of the World Trade Center in 2001. On stage, Trump waved his arms around with his hands at an odd angle in an apparent impression of Kovaleski, whose disability affects his arms.

Kovaleski told CNN that he did “not recall anyone saying there were thousands, or even hundreds, of people celebrating. That was not the case, as best as I can remember.”

“I have no idea who this reporter, Serge Kovalski [sic], is, what he looks like or his level of intelligence,” Trump said in a campaign statement issued Thursday afternoon. “Despite having one of the all-time great memories, I certainly do not remember him.”

Trump demanded an apology from the Times and added ““Kovaleski must think a lot of himself if he thinks I remember him from decades ago — if I ever met him at all, which I doubt I did. He should stop using his disability to grandstand and get back to reporting for a paper that is rapidly going down the tubes.”

Kovaleski said in an interview earlier this week that he’s confident Trump remembers him and his condition. 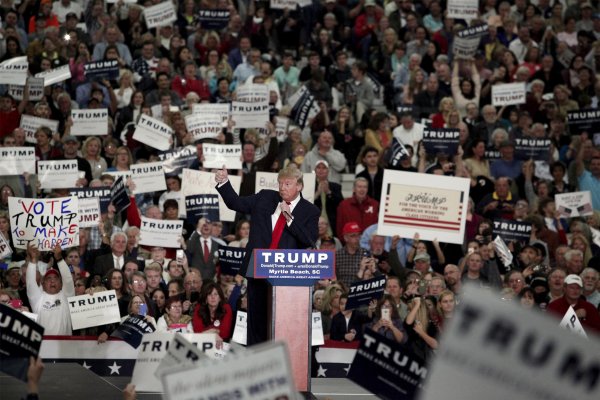 Donald Trump Under Fire for Mocking Reporter's Disability
Next Up: Editor's Pick