This Is the Best Wireless Speaker I've Ever Heard

For years, home audio companies have been trying to design speakers that are physically smaller, while somehow making their sound almost magically bigger. Can it be done? Sure. Can it be done well? Probably not to the liking of a finely-tuned ear.

But wireless audio company Sonos is trying to reverse the trend of ever-shrinking speakers with its Play:5, a new, bigger piece of equipment. And the difference it makes isn’t just big — it’s huge.

First off, let’s not pretend the Play:5 is built to compete with the pocket-sized Bluetooth speakers you can strap to your bike’s handlebars or backpack. These devices have flooded the market — and our poor eardrums — for years. By contrast, Sonos’ new 14-pound bass-bumping behemoth has no battery, it won’t double as a device charger, and it can’t even AirPlay out from your iPhone.

However, with a price point of $499, the Play:5 is gunning for a very different market. With this cinderblock of sound, Sonos is trying to reach high-end audiophiles who have been shoehorned into a world full of lo-fi streaming services. We’re talking about the kind of people who would love to play vinyl quality music, if only it came in a catalog as deep as Spotify or with a user interface convenient as Pandora. As such, Sonos’ promise is a simple one: Its speakers can make your streaming audio sound better than it really does. And with the Play:5, they do.

Designed to take the place of stationary hi-fi systems, the Play:5 pulls down audio streams via Wi-Fi, pours sound into any space, and looks very good while doing it. While it’s technically wireless, it’s not entirely cordless — the speaker’s six digital amplifiers, three tweeters, and two mid-woofers would chew through any battery on the market. And once you see it in person, you would realize it’s far too large to be portable. At 8-by-14-by-6-inches, it’s about the size of a small microwave, so you better have a sturdy shelf to accommodate it.

Alternatively, if you’ve got two sturdy shelves, Play:5 has a setup that will blow you out of your couch. Pairing two Play:5 speakers together on one network will turn the devices into left/right stereo speakers with enough audio oomph to rock you like a hurricane, wagon wheel, or a baby, depending on your musical preference. Setup is seamless, the sound is immersive and warm, and the high- and low-ends are as crisp as the mid-range.

Able to connect to a wide range of online music services through the Sonos app (available for Android, iOS, Mac, and Windows) — including Amazon Music, Google Play, iHeartRadio, MLB Gameday, Spotify, Stitcher, and a vast menu of other options — the Play:5 has the potential to be the one-stop for all your music listening needs. And you don’t even need the app to play your favorite jams; just press the play button on the top of the device, and audio pours out, without the assistance of the smartphone. That’s because the speaker plugs directly into your Wi-Fi network. The smartphone app just functions as a remote control and content guide.

If you’re an Apple user, the Play:5 has an extra ace up its sleeve called Trueplay. Tapping into your iPhone or iPad’s microphone to take audio measurements of the room — much like many home theater receivers do with small, wired microphones — Trueplay fine-tunes the Play:5 to perform perfectly in whatever room you place it in. Thinking of slow-jamming in your study? Trueplay can make it velvety smooth. Do you have a country music kitchen? Trueplay will fine-tune your twang. Bollywood in the bathroom? Okay, you get the picture.

The feature works without a hitch, with a little video showing users exactly what to do during the process that takes less than two minutes. It’s an idiot’s take on equalizers, and I loved how it made my music sound.

If I had one complaint about the Play:5 and Sonos in general, it’s that Apple Music, the company’s new streaming music service, is not supported. Sonos says it’s working through the process with Apple, and it should be rolled out by the end of the year.

When or if that happens, there’s little doubt in my mind that the Play:5 is the best wireless speaker on the market. At $499, it might not be the best speaker for you, but everything has its price. 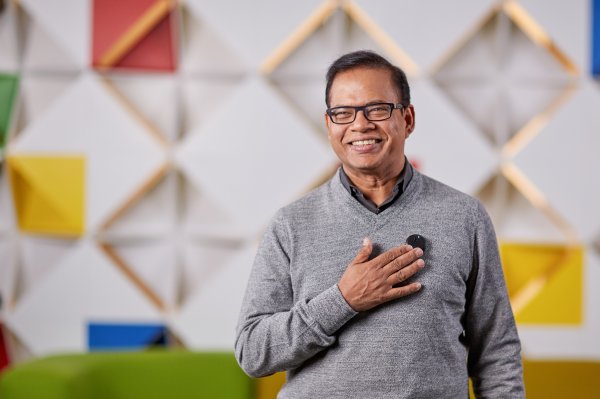 Google Made a Gadget Based on Star Trek Communicator
Next Up: Editor's Pick