President Barack Obama honored Steven Spielberg, Barbra Streisand, and 15 others with the Presidential Medal of Freedom — the nation’s highest civilian honor — in a ceremony held Tuesday at the White House in Washington, D.C.

“Today we celebrate some extraordinary people: innovators, artists and leaders who contribute to America’s strength as a nation,” Obama said.

Of Spielberg, Obama cited his extensive body of work. “In his career, Steven has introduced us to extra-terrestrials, rogue archaeologists, killer sharks, he’s taken us to Neverland and Jurassic Park, but also the beaches of Normandy and Nazi concentration camps,” the president said.

As for Streisand, the president joked that she “has collected just about every honor and award that there is – I couldn’t believe she hadn’t gotten this one.” He then discussed her advocacy and worked in a Yiddish word that Streisand fans have been know to use as a way to express their emotion.

“Off the stage, she has been a passionate advocate for issues like heart disease and women’s equality,” Obama said. “I’m getting all verklempt just thinking about it.”

You can watch video of the ceremony below, beginning at the 43:28 mark. 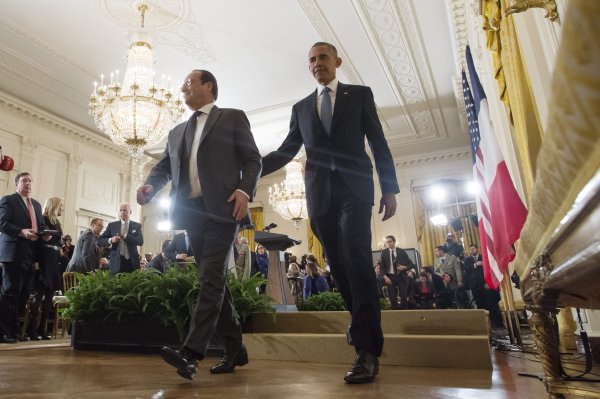 Obama Says U.S. Will Stand With France Against ISIS
Next Up: Editor's Pick