Amazon Studios is pulling the lavish The Man in the High Castle ads that decorated subway cars in New York City after the Nazi signage — including the altered American flag used in the series — upset commuters, EW has confirmed.

The streaming service has decided to discontinue the ads wrapping the entire 42nd Street subway shuttle cars that had been scheduled to be displayed until Dec. 14. (Posters for the series will appear in subway stations until Dec. 6.) The charged imagery, including the Nazi Reichsadler eagle and the Japanese rising sun, play a chilling role in the series, as they serve to immerse viewers in an alternate history that imagines the U.S. in the years after the Allied powers lost World War II.

The ads drew complaints from subway riders, as well as the Anti-Defamation League, whose New York regional director said criticized the campaign for not providing enough context for why the Nazi insignias were shown.

It’s a statement the Man in the High Castle creator and executive producer Frank Spotnitz tells EW he agrees with, though he points out the show’s very premise is challenging to advertise.

“It’s very difficult with a show with subject matter like this to market it tastefully, so I understand they’re walking a very difficult line,” he says, adding that he doesn’t work with Amazon for marketing decisions like these. “If they had asked me, I would have strongly advised them not to do it. … I read what the director of the Anti-Defamation League said, and I thought he was 100 percent correct, which is that when you take these symbols out of the context of the show, then they can be offensive and upset people. Within the show, there is a context where you see why [they’re used], but just to put them out like that without the context was unfortunate.”

In fact, the series has faced public consternation before, while filming in Seattle, especially when it came to dressing sets, because locations and companies refused to display the symbols. Much of the Nazi imagery had to be added using visual effects: a rocket that appears in the pilot was initially going to be a dressed-up Boeing jet, but the company refused to allow production to paint a swastika on it. The Times Square scene that opens the show was filmed in an empty parking lot to avoid displaying any billboards showing the Nazi influence.

Drew Boughton, the production designer for the Man in the High Castle pilot, told EW in August that nailing down the show’s “look” involved being as sensitive as possible to the imagery. When theywere allowed to paint an offensive symbol, they did it as late as possible in production so it wouldn’t have to appear for too long on set.

“Being effectively unable to put up any swastika flags, we were able to have small things on license plates and on armbands but we didn’t put them on until right before the cameras would roll, out of respect and good manners,” Boughton said at the time. “So that was a big part of the reality of making a show like this, is that you can’t really dress the set until right before the camera rolls.

“No one wants to see a swastika in the first place, because it’s an upsetting image that’s profoundly disturbing and brings up profoundly disturbing feelings in everybody,” he continued. “Doing a television show that relies on showing it a lot all the time is an enormously complicated thing, publicity and public relations-wise. …It’s unlike any job I’ve ever done before, where the very basic concept of the show is deeply offensive. It’s just tricky.” 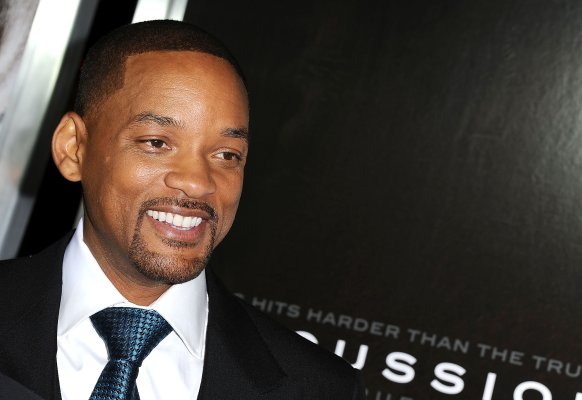 Will Smith Explains Why He Turned Down Django Unchained
Next Up: Editor's Pick