What It Means to Be Truly Thankful

This Thanksgiving is the first where I truly know what it means to be thankful, thanks to a 20-by-20 rooftop garden and a rainy afternoon.

On September 10th, my dad was hours away from his second brain surgery inside of a week. Just a few days prior, the neurosurgeons at Yale New Haven Hospital had done a biopsy to try to identify the blueberry-sized mass on his occipital lobe. Over the previous few weeks, as the mass had grown, the increased pressure had caused worsening head pain and a slowly spreading spot of blurred vision in his right eye.

But after days of waiting, the results came back: inconclusive. When you don’t know what’s growing, you’ve got to prepare for the worst. Whatever it was, the white spot on the MRI would have to go tomorrow. And because the abscess in the crosshairs was on the visual cortex, they told him, it was a real possibility that he’d wake up from the procedure the next morning without his sight.

After weeks of confining him to a hospital bed, they gave him a 30-minute pass to the cancer center’s outdoor “Healing Garden” to process the news and have some time alone. “Alone,” of course, was a relative term. He was uneasy on his feet from having spent weeks in bed so he’d need be escorted, but we did our best to give him a few feet of leeway once he stepped out onto the rooftop sanctuary.

I looked on from afar as he took slow and careful steps along the winding brick path, his hospital gown blowing behind him. He paused every few feet, marveling at the trees moving in the wind. He bent down to feel the wet grass run through his fingers, and took big slow breaths of fresh cool air. He smiled as he watched leaves perform a floating dance in the artificial stream. He stopped as he approached the door and looked up — eyes closed and arms spread wide — letting raindrops fall on his soon-to-be-twice-scarred scalp and listening to the wind chime that drowned out the city sounds several stories below.

Hours before a second brain surgery in a single week, Andrew Deziel (the author’s father) finds solace in the Healing Garden at the Smilow Cancer Hospital at Yale New Haven Hospital on Sept. 10, 2015.
Melanie Deziel

He looked at everything, smiling, and soaked it all in with a gratefulness and purity of heart that I’ve never before witnessed, and may never again. He was grateful for every single thing he saw, just because it was, and just because he could see it. It was heartbreaking and amazing at the same time.

Now, nearly three months later, he’s back to his old self; seeing, walking, talking, working, joking and gesticulating just as wildly as before. But he hasn’t lost that gratefulness. His six-inch scar, which runs from the top of his head down to the nape of his neck, is worn with pride — a sign of his strength and of an alternative outcome he’s grateful every day not to have experienced. Everything he sees and everything he has and everything he does is still something to be thankful for.

So, yes, I’m thankful for the amazing team at Yale New Haven Hospital who made sure my Dad could keep looking upon the world with wonderment for years to come.

But I’m also thankful for having been taught the true definition of thankfulness: to be glad every single day just because things are, and because you are there with them. 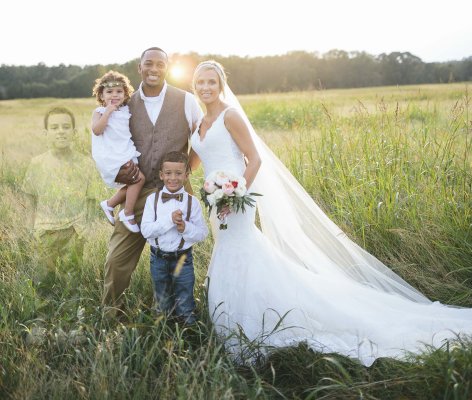 This Mother's Wedding Photos Honor the Son She Lost to Leukemia
Next Up: Editor's Pick