Obama Says U.S. Will Stand With France Against ISIS

President Obama said that the United States will stand with France to destroy the Islamic State of Iraq and Syria after the Paris attacks.

In a meeting at the White House with French President François Hollande, Obama said that ISIS “cannot be tolerated, it must be destroyed and we must do it together.”

“We’ve never forgotten how the French people stood with us after 9/11, and today we stand by you,” he said.

Obama took a more personal and forceful approach than his past speeches on the Paris attacks, noting that he has a photograph with his wife in the Jardin du Luxembourg by his bedside, and noting that “we Americans love France because we dedicate ourselves to the same ideals.”

Read More: Are the Syrian Refugees All ‘Young, Strong Men’?

The meeting between the two leaders came amid a push by France to get more world leaders on board with intensified strikes against ISIS in Syria. Later this week, Hollande will meet with leaders from Italy, Germany, and Russia to talk strategy. On Monday, Hollande met with British Prime Minister David Cameron, who said he would reach out to parliament for support on increasing attacks.

Despite Obama’s show of support, the White House has kept Hollande’s request for more support for a military intervention in Syria at arm’s length. Instead, Obama urged the European Union to allow airlines to share passenger information. He and Hollande also agreed to share more intelligence on terrorist threats and focus on hurting the financing and leadership of ISIS.

“It is France that came under attack on the 13th of November,” Hollande said. “But by targeting France, the terrorists were targeting the world.”

Obama also spoke directly to the American people about the recent controversy over accepting Syrian refugees, arguing that no one goes through more screening.

Asked by a reporter about the Turkish downing of a Russian fighter jet, Obama said that his top priority was making sure that it did not escalate, arguing that Russia should work more closely on counterterrorism efforts.

“What took place means that we must find a solution to the Syrian crisis,” Hollande added. “We know what the stakes are when we don’t do that.” 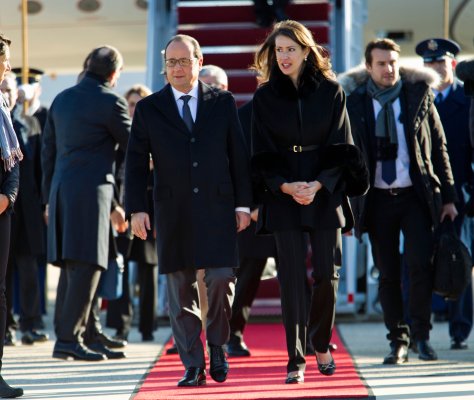 Obama to Host French President at White House
Next Up: Editor's Pick