US First Lady Hillary Clinton speaks at the "Women and Health" seminar sponsored by the World Health Organization at the UN Fourth World Conference on Women September 5, 1995, in Beijing.
EMMANUEL DUNAND—AFP/Getty Images
By Jay Newton-Small

It’s been more than 20 years since then-First Lady Hillary Clinton delivered a thundering defense of women’s rights as human rights in Beijing. What was it like being there? That is the subject of two new videos from Correct the Record, part of their series, “Let’s talk Hillary,” which seek to humanize a presidential candidate who has been in the national spotlight for well more than 20 years.

“This was a big deal. And we knew it was going to be a big deal. This was the 1995 women’s UN conference. And she was going to be giving a major speech. And here she is coming into China,” Rick Jasculca, who worked on the Advance team in the Clinton White House, and traveled with Hillary to Beijing for her speech before the United Nations Fourth World Conference on Women says in the video. “I remember feeling proud. Because I felt we said something, did something really important in a tough place to do it.”

The videos mark an historic moment where Clinton championed women’s issues speaking truth to power by standing up to China’s one-child and dowry policies. They also serve to highlight Clinton’s focus on the historic nature of her own campaign as the potential first female president. Finally, the videos are meant to humanize a woman that friends and family say is vibrant and funny but who can also come off as aloof and out-of-touch in public.

To that end the second video talks about what Clinton ate before the big speech. Rice? Peking duck? Nope, McDonald’s. “She came in and she was exhausted, she was hungry,” says Jasculca. “I had one of my advance team guys go and I said, she’s starving can we get her something to eat. And he’s running around and he comes back in, and he’s got McDonald’s cheeseburgers and fries.” The usually health and waist conscious Clinton “bust out laughing” and “polished that baby off cause she was really hungry,” Jasculca says.

For Jasculca, who first met Clinton in the 1980s when she was First Lady of Arkansas, this is the Clinton he wishes the world knew, the woman who was the first person to call when his wife was diagnosed with ovarian cancer in 2003 and the first to call when she finally passed in 2010.

“One of the reasons why I do advance work for her even now in my senior years and why two of my four kids do advance work for her is because she means something to us,” he says. “It drives me crazy when people talk about her ‘style.’ All I know is there’s a person who’s got the same sort of Midwest values that Judy and I raised our four children in.”

And while it’s personal, he does also believe she’s the right person for the job. Jasculca says he’s been involved in presidential politics all his life, starting with the 1960 Kennedy campaign.

“I always believe that people who are running for president needed to stand for something and the reason I agree to do the video is because my experience with Hillary Clinton is whether you agree with her on this or that she’s always someone who stands for something and stands for something important and I just feel that still matters in our politics,” he says. “She has the leadership skills that you need in this very dangerous time in our history.”

Read Next: Hillary Clinton Says China Is ‘Trying to Hack Into Everything That Doesn’t Move’ 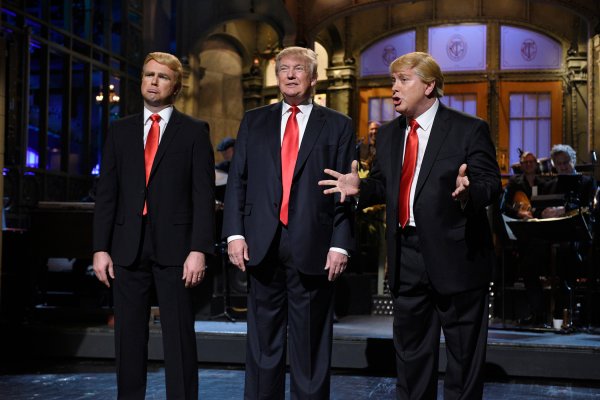 NBC Will Give Candidates Airtime After Trump Hosted SNL
Next Up: Editor's Pick