The good: Inexpensive, immersive gaming, good selection of apps, easy setup
The Bad: Only works with certain Samsung phones, touchpad can be difficult to find when wearing the headset
Who should buy it: Owners of Samsung’s most recent smartphones who enjoy gaming
Bottom line: The Gear VR is immersive and fun, but it only works with a few Samsung phones

Much like television programming, we’re living in a golden age of video gaming. Take the upcoming No Man’s Sky, a richly rendered universe players can explore almost infinitely. Or current titles such as Destiny and Fallout 4, which allow you to customize a character indefinitely. And yet, despite being mesmerizing, none of these games has made me feel like I’m in a different place physically. None actually made my stomach drop or prompted me to reflexively look over my shoulder to make sure I wasn’t being followed.

These are the types of experiences I had while gaming in virtual reality for the first time using Samsung’s new Gear VR headset. It was far more addicting than I had expected.

A ton of companies, from Sony to Facebook’s Oculus, are betting virtual reality is the future of entertainment. But so far, few headsets have actually hit market. Most will likely be expensive when the are released, costing several hundreds of dollars.

Samsung’s Gear VR is a $100 virtual reality headset that’s compatible with the company’s newest phones. It recently became available through Samsung’s website, Amazon, and Best Buy. It differs from other similar products in that it’s actually powered by your phone—simply plug a compatible phone into the front of the device, and it automatically launches the Oculus interface. That’s right Oculus. Samsung’s virtual reality experience is based on Oculus VR’s platform, which means Gear VR users will have access to some of the same apps that will be available for the Oculus Rift when it launches.

Because of its low price and early arrival, Samsung’s Gear VR is likely to be the first taste of virtual reality for many people. Here’s what it’s like:

Make no mistake, the Gear VR, like other VR headsets, is not one of those wearable tech products that’s meant to blend in with your everyday attire. When strapped to your face, it looks like a contraption from science fiction.

That’s not necessarily a bad thing; the Gear VR isn’t a fashion accessory. It’s meant to be a personal entertainment device that’ll likely be used in your own home rather than out in public. (But, hey, who knows?)

The headset itself is comfortable to wear extensively, so long as your eyes are adjusted to the gargantuan bright screen that appears when you put it on. Soft foam lines the portion of the device that sits on your face, and it’s lightweight enough to move freely while using.

First-time VR users will probably have to take a few minutes to adjust their eyes to the screen, especially those who wear contact lenses like me. The sheer brightness of the screen felt unmanageable during the first few minutes, but after about 15 minutes or so my eyes quickly adjusted.

New technology products are often only as good as the apps you can use with them. In the case of the Gear VR, there are 100 apps available for the headset with 40 more on the way. Other than a few occasional hiccups, the several apps that I sampled ran smoothly and felt immersive.

Adventure Time: Magic Man’s Head Games, which is based on the popular Cartoon Network TV show, is among the more polished games available for the Gear VR. It requires a video game controller to play, which needs to be purchased separately, but it’s astounding to see how virtual reality expands what it feels like to play a game.

In this action adventure game, the player follows two main characters, Finn and Jake, while battling enemies. You technically play as Finn since you’re controlling him from a third-person perspective, but in the game you’re meant to be a third character that follows the pair throughout their adventures.

I instinctively tried to rotate the camera using the right joystick on the controller to see what was behind my character, just like I usually would when playing a console game. It took a minute to register—as it does with most people who are new to virtual reality—that I had to physically turn around in my seat to see the world behind me. It felt completely new.

When the game begins, you start as a small character that’s shorter than both Finn and Jake. Later, your character grows to be gigantic, and it actually feels like you’re moving upward as the character elongates. Because the movement was unexpected, it actually made my stomach drop a bit.

Dead Secret is another example of a captivating game for the Gear VR. It’s a murder mystery in which you’re a reporter digging through an abandoned house for clues about how the owner died. It’s chilling yet entertaining, and in some instances deeply creepy. During one scene, I jumped to turn around after seeing a faint shadow behind my character’s reflection in the mirror.

Virtual reality isn’t just for video games. There are a host of apps designed for travel, education, and social interaction as well. One such app, for instance, transported me to Mars to learn about the different types of landscapes there.

Many Gear VR apps worked well, but there are some in which virtual reality doesn’t enhance the experience whatsoever. Netflix is one example. Although the app creates the experience of watching movies and TV on a large screen television, it was too bright to comfortably watch for the duration of a TV show.

While the Gear VR is enjoyable and exciting to use, it isn’t perfect. The device isn’t for everybody; it’s only for those who already own one of Samsung’s newest phones or are willing to buy one. The Gear VR is compatible with Samsung’s Galaxy S6, Galaxy S6 Edge, Galaxy Note 5, and Galaxy S6 Edge+, and it won’t work with any phones not made by Samsung.

In certain instances, it’s also hard to navigate. The touchpad along the side of the headset, which is the primary means of interacting with the device, is sometimes difficult to find when the goggles are in use. The touchpad has a smooth plastic feel to it just like the rest of the headset, making it hard to distinguish y blind touch.

What makes using apps in virtual reality feel so new and different is the notion that it feels as if you’re inside the app rather than just poking at it. This means whether you look up, down, to the left or to the right, you’ll see whatever environment the app believes you to be in. I found that while using the Gear VR, the headset would occasionally lose focus when I moved my head from side to side. As a result, I had to adjust my focus using the wheel at the top of the headgear often.

The Samsung Gear VR may not be perfect, but it’s captivating enough to persuade me that virtual reality has the potential to be more than a niche. It’s an early entrant to the modern virtual reality space, which means it’s only likely to get better once the competition becomes more intense. If you already own a compatible Samsung phone or plan on buying the Gear VR for someone who does, it’s a worthwhile choice. 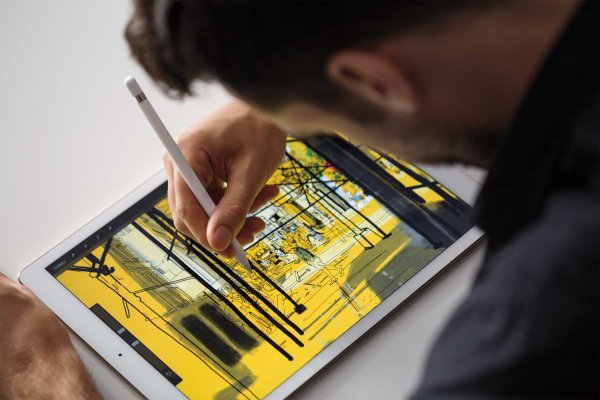 iPad Pro Review: The Best Computer Apple Has Ever Made
Next Up: Editor's Pick