This Is Life Under a Terror Lockdown in Brussels

The headlines portray Brussels as a ghost town, with the streets in the historic center of this European capital eerily quiet, while the sight of soldiers and tanks instills fear in those who do venture outside. And maybe that’s true, but it’s difficult for me, a resident of Brussels for nearly three years, to even tell — I can’t even get to the center of town.

As for most the city’s 1.2 million inhabitants, it’s not the army in the street or the threat of gunfire and explosions that’s really overshadowing my life — it’s the complete shutdown of public services, which is making normal life impossible.

Though the alert level was raised on Saturday — 21 people have so been arrested in Brussels in connection to the investigations of the Paris attacks — it was the start of the working week on Monday when the reality of life under lockdown hit home. A text message from my 7-month-old son’s nursery informed us that the government ordered them to close. Schools and universities also shut their doors, so even parents who could get to work without taking the Metro — which has been closed since Saturday — had to find someone to look after their children.

Luckily my son’s babysitter is a university student, so she was free to come and look after him while I worked from home. But by Monday morning, it wasn’t only the Metro that was paralyzed. Some trams and 15 bus lines were also suspended. Those buses that were running had a reduced service. It wasn’t clear why, but one driver told my son’s babysitter that some staff had refused to come in because they were worried for their safety. So it took her over an hour to complete a journey that usually takes half that time.

When my partner tried to get to work, he waited an hour for a bus that never came. As he sat trying to keep warm at the bus stop, police came and shut down the roundabout in front of him for a few minutes, then opened it again. This is in a suburb far away from Molenbeek — the neighborhood where some of the Paris attackers were based — the institutions of the E.U., and the main bar-and-restaurant district.

It seems surreal and chaotic — like an alternative reality in my adopted city. I can sense it even though I have not left the house since Saturday morning. It’s not fear keeping me inside, at least, but the idea of navigating the late-running buses with a baby. All across the city people are experiencing the same frustrations — trying to work from home with impatient children who don’t understand why they are not in school or why they can’t do something fun like go to the park.

And there are costs to living under lockdown — my partner’s taxi to work, the babysitter, now a taxi home for the babysitter. Because of the problems with public transport, I have not been able to go to the shops, so maybe I may have to pay for a takeout for dinner as well.

More than 10 days after Paris, it’s still hard to believe that a terrorist threat has managed to cause such chaos in a European capital. Yet it has. So I sit in my home, following the more dramatic events on Twitter, ears attuned to the distant sounds of police sirens, which mingle with the tune of the ice cream truck. At least the truck is still making its rounds, a small slice of normality in an otherwise bizarre week. 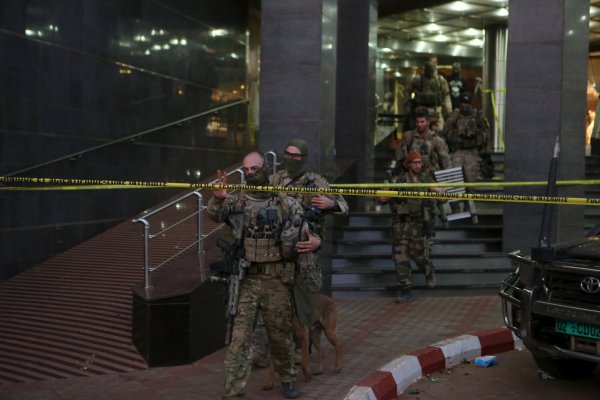 U.S. Citizen Among Mali Dead
Next Up: Editor's Pick