How the Pope Could Play Peacemaker on His Africa Visit

A woman stands in front of posters of Pope Francis at the Martyrs of Uganda church in Bamako, Mali, on Nov. 8, 2015.
Joe Penney—Reuters
By Aryn Baker

On Wednesday, Pope Francis embarks on his inaugural visit to Africa with an ambitious itinerary that includes three countries with 87 million people and encompasses some of the biggest issues facing not only the Catholic Church, but also the world. During his six-day visit he will meet with regional leaders in Kenya, Uganda and the violence-wracked Central African Republic—his first visit to an active war zone. In public celebrations of Mass and in private meetings with religious leaders and speeches to representatives from the United Nation’s Environment Program, which is based in Nairobi, Pope Francis is expected to address climate change, poverty, religious extremism and refugees.

True to his reputation as a man of the people, he will spend much of his time with the poor, the downtrodden and the marginalized, meeting child soldiers, ministering to people with HIV, spending time with refugees fleeing religious violence, meeting Muslim leaders and touring one of Kenya’s biggest shantytowns. Francis isn’t coming to Africa on official Catholic Church business so much as he is using the continent to demonstrate the urgency of finding practical solutions to global concerns.

The reception in Africa, where millions are expected to attend his open-air masses and hundreds of millions more to watch on TV, is a demonstration of how Pope Francis’ appeal transcends religion and speaks to a continent-wide craving for recognition and compassion. “There is a huge sense of excitement and anticipation,” says Lane Bunkers, the Kenya and Somalia country representative for the U.S. based Catholic Relief Services aid organization, by telephone from Nairobi. “This guy has a message that has crossed all religious boundaries and resonates with many people.”

In Kenya, where a third of the population is Catholic, the pope will encounter outsize expectations. According to a recent report by the Infotrak polling organization, more than 75 percent of Kenyans from all religious backgrounds hope to see the pope tackle corruption, accountability and tribal biases among Kenyan leaders. That’s a lot to ask of Francis. While the topic of responsible leadership may come up in his sermons and speeches, he is not one to criticize leaders directly, as U.S. President Barack Obama did in his recent trip to Kenya, where he raised the issue of government corruption as an impediment to growth and stability.

Instead, says Bunkers, Francis may be more effective as a role model. The Pontiff’s first stop in Kenya will be at Nairobi’s State House, which will provide a good opportunity to stress the importance of Christian service to elected officials, says Bunkers. “Those who suffer the most from corruption are the most vulnerable—the poor who aren’t getting an education or health care or welfare because of the misuse of public funds. So I think the message needs to be service to the poor, and the responsibility that comes with the trust and faith that the people have put in these officials.”

Pope Francis’ speech to the UN agency in charge of environmental protection will have a global audience, coming just three days before world leaders convene in Paris for a conference on climate change. The pope has already proved himself an ardent environmentalist with the release of his encyclical on environmental protection in June, which calls for a more responsible use of nature’s riches. His speech, coming in a country especially vulnerable to climate change brought about largely by consumption in the rich nations of the world, serves as the second half of that message, and will help drive his points home.

So too will Pope Francis’ visit to a church in Nairobi’s Kangemi slum, home to an estimated 100,000 residents who live largely off the grid and with limited access to sewage and sanitation services. “It is God’s gift the pope is coming to this church,” Father Melchior Marandu of the St. Joseph the Worker Church told The Star, a Kenyan newspaper. “This is not a rich area, it is just a slum. That’s a powerful sign: he is telling us we are not forgotten.”

Francis may have more difficulty navigating official Catholic doctrine that pits Africa’s highly conservative church leaders against the pope’s more liberal message of tolerance on controversial issues such as homosexuality and divorce. Gay sex is illegal in several African countries, including both Kenya and Uganda, and discrimination against homosexuals is both widespread and, in some cases, encouraged by church leaders.

Though not on the official agenda, homosexual rights may come up on the pope’s visit to Uganda, where a small but determined group of gay rights activists continues to fight anti-gay legislation. They are hoping that Pope Francis will share his message of relative acceptance—“Who am I to judge?” he once said in response to a question about homosexuality—during his visit. “We pray that this pope can be successful in bringing a message of tolerance for those who are different from us as far as their human sexuality is concerned,” says Uganda’s former Anglican Bishop Disani Christopher Senyonjo. Now retired, Senyonjo has campaigned tirelessly on behalf of Uganda’s Lesbian, Gay, Bisexual and Transgender population, saying that they are all equal before God. “If the pope can demonstrate understanding of people who are different, that would a good example for the people of Uganda to follow,” he says. Especially since nearly half the population of Uganda is Catholic.

On November 29, Pope Francis flies to his final, and most dangerous, destination in Africa: Bangui, the war-torn capital of the Central African Republic (CAR), Bangui. CAR has been embroiled in violence ever since the newly-elected president, François Bozize, was deposed in 2013 by a group of disgruntled Muslim rebels. A Christian militia rose up in response, and both sides have engaged in a series of reprisal attacks that have left an estimated 6,000 dead.

Pope Francis plans to visit a camp for people displaced by the violence, and then to pray at Bangui’s central mosque. In a French-language radio message released on November 23, the pope told residents of the Central African Republic that, “I hope with all my heart that my visit may contribute, in one way or another, to alleviate your wounds and to favor conditions for a better, more serene future.”

Unlike his diplomatic work on Cuba, in which he encouraged the U.S. to normalize relations with an historic enemy, Pope Francis has a limited political role to play between the CAR’s warring militias. But his call for inter-religous harmony just a month before presidential elections could calm tensions enough to ensure a stable transition. “Seeing him shake hands and pray with Muslim leaders would go a long way towards encouraging inter-faith dialogue,” says Bunkers of Catholic Relief Services, which promotes such dialogues among divided communities throughout Africa.

Despite the fact that the United Nations has deployed 300 extra personnel to provide security for the pope’s visit, tensions are still high, and the papal security team says that it may have to cancel the pope’s visit at the last minute. “The pope wants to go to the Central African Republic, [and] the plan is still for him to go,” papal spokesperson Federico Lombardi told journalists on Friday. But, he added, “As every wise person would, we’re monitoring the situation.” If there is a change of plans, he noted, it would be out of concern for people attending papal event, and not for the pope himself. That would disappoint CAR’s majority Christian population, but it could also derail the country’s best chance at bringing the warring sides together in a peace-building mission that could save thousands more lives.

Most Popular on TIME
1
Melania Trump's Christmas Decorations Gave the Internet the Most Wonderful Memes of the Year
2
Who Should Be TIME’s Person of the Year for 2020? Vote Now
3
Biden Faces the Politics of Debt Forgiveness 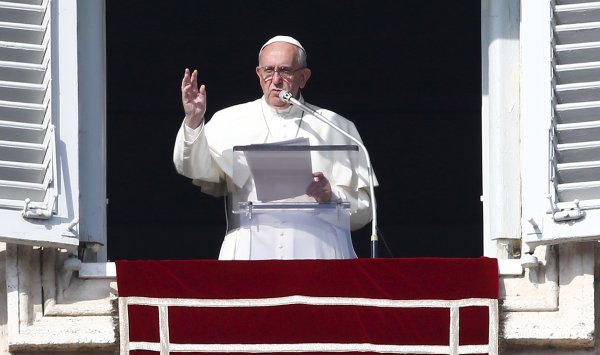 Pope Francis: Christmas a 'Charade' This Year Because 'Whole World Is at War'
Next Up: Editor's Pick