High-resolution imagery of the Subi Reef in the South China Sea, a part of the Spratly Islands group
DigitalGlobe/ScapeWare3d—DigitalGlobe/Getty Images
By Nash Jenkins

China is standing by its expansion of islets and reefs, and construction of artificial islands, in disputed waters of the South China Sea.

Regional tensions have escalated over the matter of the islands, located in waters also claimed by several smaller Aoutheast Asian nations, including the Philippines and Vietnam. Despite calls from President Barack Obama and other leaders to cease the land-reclamation exercises, the BBC reports that China says it will “expand and upgrade” facilities — which at present include airstrips of unclear purpose — on the islands.

“Building and maintaining necessary military facilities, this is what is required for China’s national defense and for the protection of those islands and reefs,” Bloomberg quoted Chinese Vice Foreign Minister Liu Zhenmin as saying during a briefing on Sunday in Kuala Lumpur, where global leaders had gathered for the summit of the Association of Southeast Asian Nations (ASEAN).

However, he also said: “One should never link such military facilities with efforts to militarize the islands and reefs and militarize the South China Sea.”

Liu’s comments echo those of Chinese President Xi Jinping, who, at a meeting with Obama in late September, publicly pledged to not “militarize” the islands.

“It is new language,” Bonnie Glaser, an expert on China’s military, told the Wall Street Journal at the time, saying it was “unclear” what was meant by militarization and asking if it meant “no fighters using the airstrips? No deployment of missiles?” 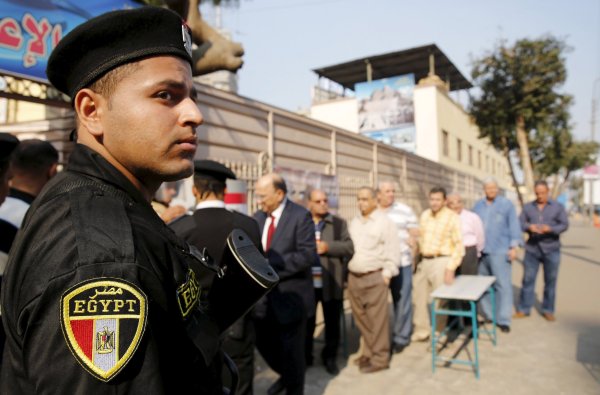 A Depressed Egypt Heads to the Polls
Next Up: Editor's Pick