Tonight’s installment of The Walking Dead, AMC’s zombie series that’s spawned both a spinoff and endless online chatter, settled a question that had been opened four weeks ago as to whether or not Glenn (Steven Yeun) was alive or dead. He scrapped his way away from the zombies threatening him; the viscera we saw wasn’t his.

But “settled” is a relative term. Death, long the province of artists looking to make a point about mortality or simply to shake up projects that risked going torpid, no longer seems like, well, a death sentence. Witness the fan speculation around the fate of Jon Snow — stabbed, apparently fatally, at the end of the most recent season of Game of Thrones. Whether or not Snow will return to the series despite having been chopped into Caesar salad has been the subject of increasingly heated fan speculation in the months since Thrones left the air.

Of course, The Walking Dead and Game of Thrones exist within the context of pre-existing work; the series are adapted from, respectively, a comic book series and a cycle of novels whose facts, or whose supernatural rules governing what does and does not constitute “death,” exist in knowledgeable fans’ minds outside of the shows’ own universes. Still, moments like Glenn’s revival make it to feel as though television is keeping up with other media in seriousness of purpose.

It wasn’t ever thus: When characters died on Mad Men, they stayed dead. (Poor Lane Pryce!) And earlier in recent TV history, HBO had an entire series about human mortality; Nate’s death on Six Feet Under, robbing the show of its notional central character, wasn’t reversed in order to bring fans a smile or to engender blog posts like this one. (Though, in tepid fairness, he did come back as a ghost.) It gave rise, like deaths on TV from Sesame Street’s Mr. Hooper to The Sopranos’s Adriana La Cerva, to complications; it catalyzed real human emotions within the show that couldn’t be shrugged off. (Notably, HBO’s current series about mourning unimaginable tragedy, The Leftovers, is viewed by a fraction of the people that tune into The Walking Dead, and is a far more difficult sit.)

But, for all that they exist within the world of prestige cable — whatever that means to the viewer — Game of Thrones and The Walking Dead are of a different breed. They’re at once aspiring to art and commerce, and that means providing a healthy dose of fan service. Glenn escaping seemingly certain death by, basically, crawling away seemed particularly chintzy. Peril is, of course, a central element of television — if it weren’t, Homeland would by now be about a Bethesda-area woman who always remembered to take her meds. But death is, or should be, different.

Contrast this to the world of even the most commercial films. In the most recent, and final, installment of The Hunger Games series, the number-one film at the box office this weekend, Katniss’s sister Prim is killed. Prim wasn’t a minor character, but her death has meaning; it defines what happens going forward. But that film series had a set ending (indeed, it ends when the credits roll in theaters right now). It isn’t fun to see Katniss mourn Prim. But there’s a point of view there other than “gotcha!”

The Walking Dead does not, and could potentially spin its wheels for years to come. Having played the “fake death” card once, the series can’t, really, again — but it’s hard not to see how, with all the attention the series garnered from one fake-out, they wouldn’t be tempted. Death-defying acts are addictive, even if they sap the audience’s trust little by little. 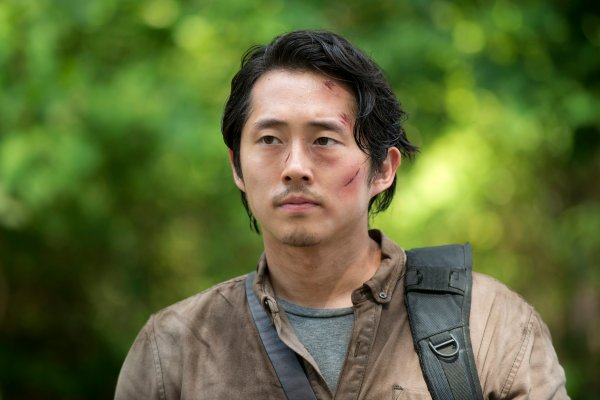 Here's What Actually Happened to Glenn on The Walking Dead
Next Up: Editor's Pick