The Cost of the Paris Attacks

French soldiers patrol in front of the Paris ferris Big Wheel next to the Champs Elysees in Paris on Nov. 22, 2015.
Francois Mori—AP
By Jay Newton-Small

On most days, some 20 people from around the world look at Thierry Dufort’s Airbnb posting for his guest room in his swanky flat a block away from the Arc de Triomphe in Paris. Out of those, Dufort negotiates two to three stays a month, each lasting a few days. The money helps supplement his income like 60,000 other Parisians—by far the biggest Airbnb hub outside of the United States.

But in the past week a grand total of 10 people have even looked at Dufort’s page. “People are afraid to come to Paris,” he says. “I’ve heard of all kinds of cancellations.”

“We’re working with French authorities to do everything we can to secure our hotels and to reassure travelers that it’s safe to travel to France,” says Lumoniet. “It sends a good message that the [United Nation’s climate change conference] is going ahead this week. It tells the people of the world that Paris is safe.”

World leaders, including President Obama, are expected to convene in Paris this week for the 21st set of climate change talks hosted by the United Nations. The world is on the verge of an historic agreement and the leaders decided to proceed despite the attacks. The only concession was to reroute the scheduled march to London. For France, much rides on the talks, besides the future of the climate.

Tourism is one of the largest sectors of the French economy, accounting for 7 percent of France’s gross domestic product. France is the number one tourist destination in the world, with 83 million visitors annually. Those tourists spent $45.3 billion in 2013, according to the Ministry of Foreign Affairs. Winter is the high season for Asian tourists, seeking to experience a cool European winter without too much chill—it rarely snows in Paris and its misty winter fogs are often perceived as mysterious and romantic in the City of Lights. At least one estimate put the economic impact of 9/11 at $3.3 trillion; the cost of the Paris attacks could easily reach tens, if not hundreds, of billions of dollars.

“The attacks will definitely have an impact on our tour operators,” Nelson Lee Chean Chai, honorary secretary of the Malaysian Chinese Tourism Association, which has 600 members 40 percent of whom operate tours to Europe, told The Sun Daily, “but I believe that given [the French government’s] long experience in this line, they can deal with the situation well.”

The biggest concern is the closing of France’s borders, sparking long delays as passports are checked and luggage search. That is also having an impact on commerce for companies that operate in more than one European country. Following the attacks in Paris, several countries moved to tighten border controls to stem the flow of immigrants from Syria and Iraq.

In the wake of the attacks, Paris closed all of its parks and tourist sites. The U.K. and U.S. governments issued travel warnings to Paris. U2, the Foo Fighters and Prince canceled concerts. Les Galleries Lafayette, one of the largest department stores in Paris, had a bomb scare on the day after the attacks prompting an evacuation. The public sites have all since reopened, but the tourists haven’t rushed back.

On Sunday the Place de la Republique saw a near stampede after some firecrackers were set off. The rush of hundreds, if not thousands of panicked mourners who had been paying respects at one of the six memorial sites closed traffic and locked down the sector briefly. On Wednesday, the police briefly shut down the Gare du Nord train station to do a controlled explosion of suspicious packages. “It was scary,” says one American banker in town for the day from London, where he moved after surviving 9/11 at the World Trade Center. “It brings back bad memories.” Earlier that same day, much of northern Paris was shut down as the French police raided a Saint-Denis apartment building, killing three people including suspected mastermind Abdelhamid Abaaoud.

French authorities hope that was a turning point and that visitors will believe Paris safe again, even though at least two suspects involved in the attacks remain at large. “It’s too early to know the full impact of the attacks,” says Véronique Potelet, a spokeswoman for Paris’s Tourism Bureau. “We hope that the Saint-Denis raid reassures people that every measure has been taken to secure Paris.”

But in Le Marais, the popular Jewish Quarter and shopping area, almost half the stores remained shuttered on Thursday and security checked shoppers’ bags of most stores. Most hotels in Paris had security searching luggage. “We can’t live like this,” says a woman who only identified herself only as Sophie, a sales clerk at the Kookai, Naf Naf outlets in the 2nd arondissement. “We are a free society. We can’t live under lock and key forever.”

Another sales clerk at Zadig & Voltaire has faith France will pull through. “We are strong,” she says, pointing to the fact that France bounced back quickly after the Charlie Hebdo attacks. But, as U.S. Secretary of State John Kerry pointed out in a Paris speech on Sunday, those attacks were targeted, whereas the random killing of people at a soccer match, eating dinner at restaurants and enjoying a concert at the Bataclan had the potential to scare any would be visitor to Paris.

The attacks hit at the core of the French economy at a delicate time. The Eurozone grew a meager 1.2 percent in the third quarter, below expectations. And French President François Hollande has come under fire for doing too little to revive France’s limping economy in recent months—something the attacks surely won’t help—with an unemployment rate of more than 10 percent. Hollande has said he won’t stand for reelection in 2017 unless the economy recovers.

France won’t be the only economy affected by the attacks. Between border bottle necks and security concerns—anecdotally London and Brussels also reported low shopper turnout in what would otherwise be one of the busiest shopping seasons ahead of the holidays—and the integrated nature of Europe’s economy, the attacks could drag Europe back into recession. Analysts last week increased their expectations that the European Central Bank will announce more stimulus measures at its December meeting on top of its $1.1 trillion Euro bond-buying scheme already in place.

As of Friday morning, almost a week after the attacks, the newly built Christmas markets on the Champs-Élysées stood empty, with only a few stalls open. No children rode the giant slide; the carousel lay shuttered and locked. A few brave families braved a fine rain to sample French sausages and cheeses at one of the few open booths. Brasseries and cafes began to fill up by week’s end on the Left Bank, which has been less effected by the attacks, but most restaurants stood virtually empty throughout the Right Bank. Online, hotel prices tumbled from more than $700 for a hotel room at the W L’Opera or the Westin Place Vendôme to less than $450. Impromptu sales also began popping up at the shopping mecca in Châtelet Les Halles.

But, by Friday, Dufort received his first new booking since the attacks. “I have hope,” he says, “that things will soon go back to normal.”

Read Next: Thanksgiving in Paris, Then and Now 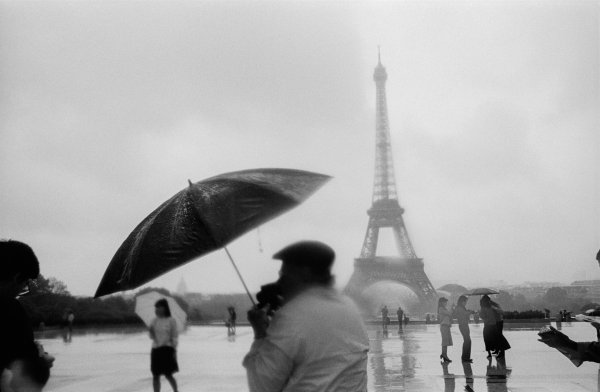 Thanksgiving in Paris, Then and Now
Next Up: Editor's Pick