At a rally in Birmingham, Alabama Saturday, Trump told the crowd that he observed “thousands and thousands” of people in New Jersey—where Trump says there are “large Arab populations”—cheering as the World Trade Center came down, reports Yahoo News.

Trump doubled down on his comments Sunday during a phone interview with George Stephanopoulos on ABC’s The Week.

The Anti-Defamation League, a Jewish watchdog group, took issue with Trump’s statement shortly after, telling BuzzFeed News Sunday, “It is unfortunate that Donald Trump is giving new life to long-debunked conspiracy theories about 9/11.”

“This seems a variation of the anti-Semitic myth that a group of Israelis were seen celebrating as the Twin Towers fell,” the ADL said. “His comments are irresponsible — not to mention factually challenged.”

According to the New York Times, it is hard to determine whether Trump was specifically referring to Muslims. A rumor circulated at the time that that Muslims were celebrating in New Jersey was quickly debunked by police.

Trump’s comments come while many of the GOP presidential candidates have called for blocking Syrian refugees and increased scrutiny of Muslims after the terrorist attacks in Paris claimed 129 lives last week. 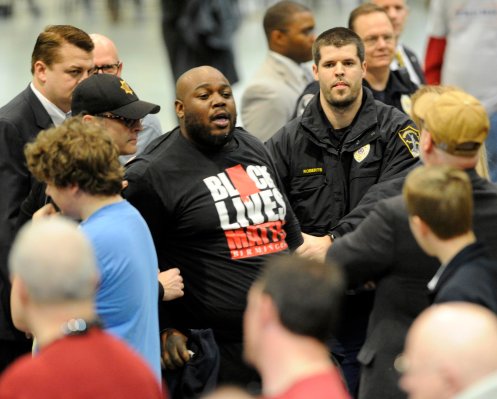