'Your People Will Be My People': Lois Lowry on Her Favorite Bible Passage

Ideas
By Lois Lowry
Lois Lowry is the author of The Giver and Number the Stars.

This excerpt was adapted from The Good Book: Writers Reflect on Favorite Bible Passages.

I think it was probably 1985. The date doesn’t matter, really, but I am trying to get my bearings here in order to tell this story. I know it predated e-mail, because I remember getting this information in an actual letter addressed to me in Boston, and that a photograph fell out from between the folded pages. It had been taken from above, from the sky, looking down on a fairy-tale stone castle, crenellated tow­ers and parapets and all, surrounded by thick green woods. I unfolded the letter, which had been addressed to me by my son Grey, a young fighter pilot, and chuckled when I read his first sentence. “I thought I’d show you my new digs,” he had written. Yeah, right, I thought. He had just been reassigned to an air force base in southwest Germany, and I pictured him in the BOQ, tucking this stock photo into his letter with a grin as he wrote home to tell me of his new housing, probably something built from cinder block on the base. But, as it turned out, he wasn’t joking. He had taken the photograph from his F-15, he explained. His next paragraph began: “I met this countess.” Gulp. From this adventurous, outgoing, blue-eyed son, I had heard, from time to time: “I met this actress” or “I met this . . .” whatever.

And it was true. But she was not a playgirl, not nubile minor royalty with a penchant for yachts and roulette. She was a handsome, dignified widow with a gray chignon and a history of loss. The vast acreage of forests belonged to her family, and she had spent the preceding years—and no doubt a lot of family deutsche marks—restoring the castle from extensive World War II bomb damage, which had left it crumbling and ruined. Grey had met her at an official reception someplace. She had liked him. He was looking for a place to live. And the castle had a sepa­rate apartment within its walls.

It was while he lived in the castle that Grey met Margret, the beautiful young German woman he would eventually marry. And so, in 1987, we headed to Germany. The night before the wed­ding we sat in the immaculate kitchen of Margret’s parents, who still lived in the tiny village—population five hundred—where they had grown up, met, married, and raised their two children. Their English was makeshift, and our German was even less than that. Martin, Grey’s stepfather, hit it off with Johann, Margret’s father, over schnapps; they laughed and clinked glasses and told jokes that no one really under­stood, though one in which the punch line included the phrase “horse’s ass” seemed to leap the barrier. Her mother, Katerina, and I looked on and tried to fill in the linguistic gaps, sometimes with hand gestures.

The next day, dressed in our best, we sat in an ancient Catholic church and watched our children marry each other. The service was formal, in German, and long. I understood nothing of what was being said or sung. My mind wandered and I looked around. Beside me was Martin, who had mentioned casually the night before, in what had be­come a brief awkward moment, that he was Jewish. Hastily changing the subject, he had talked about leaving college in his freshman year to join the army during World War II. He had described being on Oki­nawa; the German in-laws-to-be recognized the name and repeated it solemnly: Okinawa.

And with that, our conversation had turned to the war years. Johann was younger than Martin, though not by much. “I was waiting to be seventeen,” he said in broken English, “so I could join the army and get my gun.”

“I was eighteen,” Martin told him. “Infantry.”

We sat there in silence for a moment.

“We were fools,” they agreed, and poured another round. “We were all fools.”

“I was just a little girl,” I said. “Eight when the war ended and my father came home from the Pacific.”

Margret’s mother nodded. “I was nine. In this village. The Ameri­cans were coming. We were very scared. They hid us in the—I don’t know what you call it.” She gestured toward the floor of the kitchen. “Down there.”

“Yes. When the Americans came toward this village—down this road—they hid us in the cellar. All the village children. The door was closed. It was very dark.

“We were crying,” she said. “They had told us the Americans would kill us.”

None of us said anything. I was still hearing in my imagination the rhythmic thudding sound of the approaching soldiers, and picturing a dark basement filled with sobbing children. Martin had his forehead resting in his hands. Perhaps he was thinking of Auschwitz. Perhaps Okinawa. Johann sipped his schnapps, shook his head, and stared into the distance.

“When the door opened,” Katerina went on, “the light came in slowly, like a”—she demonstrated with her hands: a triangle, a widen­ing wedge of light—“and when I looked up, there in the doorway, in a uniform, was the first black man I had ever seen. There were other men behind him, but it was the black man I saw. He reached into his pocket and I thought he was reaching for his gun.

“I was so frightened I wet my pants.” She laughed a little, embar­rassed.

“What happened?” I asked.

“He turned to the other soldiers and he said—he said it in English, of course—‘Alle sind Kinder.’ ”

I thought I understood the German. “They’re all children.” She nodded.

“Then from his pocket, he took candy and gave it to us.”

I, an agnostic raised a perfunctory Protestant, watched her the next morning, devout and smiling, her lips moving slightly as she followed the familiar words of the German Catholic Mass. Johann’s head was bowed. Martin, the nonpracticing Jew, sat silently. Grey, in his USAF dress uniform, and Margret, in billowing white organdy, stood before the altar, their hands clasped.

Near us was the countess, austere and patrician. Her eyes were moist. Grey had become like a son to her.

Suddenly, in the middle of the service, the organist played an intro­duction, and in a balcony at the back of the ancient church, a woman rose and began to sing in a clear soprano. She sang in English.

Wherever you go I shall go. Wherever you live so shall I live. Your people will be my people.

I found myself, inexplicably, weeping.

Later, back home in the States, I looked around for a Bible. The passage that had so moved me at my son’s wedding referred not to a marriage but to the loyalty of a young widow to her beloved mother-in-law. I noted that with interest, reflecting on the fact that “Your people will be my people” had nonetheless applied as well to the joining of two families on that day in Germany when we had set aside our sad histories and rejoiced together for what the future held.

The future held a little girl. My only granddaughter was born, to dual citizenship, five years after the day of the marriage, and by then our families had indeed become each other’s people.

Though I acknowledged that I couldn’t speak it, I briefly thought that I could understand German. Once, during a visit, I held my eighteen-­month-old granddaughter at the window of their home, looking across the road at a field of recumbent cows with their eyes closed. “Die Kühe schlafen,” the little girl said to me, and pointed.

“Yes,” I replied,“ the cows are sleeping.” Then I called to my son: “She said it in German, and I understood!”

He chuckled. “It’s pretty easy to understand the obvious . . . just the way you understood at dinner, when she dropped her pacifier from the high chair.”

It was only a month after she had commented on the sleeping cows that my granddaughter began the refrain that would break all of our hearts. “Wo ist mein Papa?” she asked again and again.

Where is my papa?

I flew to Germany two days after it happened, when the wreckage was still visible from the highway. Doomed by a mechanic’s error, his plane had crashed fewer than ten miles from his home. Again I sat in a Catholic church and heard ancient words in another language, this time a funeral Mass. I watched his friends and fellow pilots fly the missing man formation, the aerial tribute to a fallen flier. They had come from all over the world to honor him—one from as far as Korea.

My daughter-in-law sat by my side with her parents. Again, all of us had gathered. After the Mass, at the nearby village cemetery, we watched, listening to a bugler play “Taps,” as he was laid to rest near Margret’s grandparents. The countess stood there, separate from the villagers, anguished and alone with another unspeakable loss. We were fifty yards from the cellar where a little girl had hidden sobbing as the Americans marched into this town, where she had looked up at a black man who reached into his pocket and gave her candy.

Your people will be my people. Where you die, I will die, and there I will be buried.

From The Good Book: Writers Reflect on Favorite Bible Passages. Copyright © 2015 by the author and reprinted by permission of Simon & Schuster. 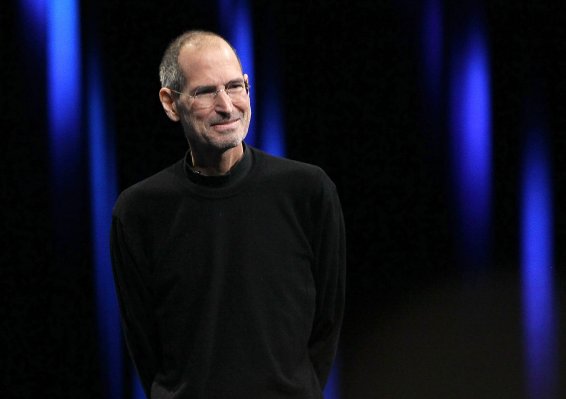 14 Books That Inspired Steve Jobs
Next Up: Editor's Pick