Thanksgiving In Paris: Before and After the Bataclan Attacks

When I think of Paris in November, I think of the time I tried to order a 20-pound turkey from the fresh poultry shop near my apartment. It was one of those classic places with birds in various states of undress hanging in the window and small bare quails nestled on a metal shelf. When I said I wanted to order an 8 or 10 kilo turkey, the man behind the counter cracked up. “Why would you want a tough old bird? What you really want is two small young ones.” Of course.

I pressed on, told him about Thanksgiving expectations, and he gave in, shaking his head at the sheer Americanness of wanting something just because it was big. But part of the fun of that particular holiday in Paris is to horrify and delight your French and European friends with notoriously American things, like giant poultry or marshmallows on vegetables.

Later, we gathered around the incongruous bird, young people from five different countries, getting up every few minutes to welcome the late-comers, laughing and swinging between languages like drunk trapeze artists. Eventually, the French among us were overcome by the sheer volume of food, so everyone lay down on the floor in rows contentedly smoking and talking about what was next. We were on the cusp of everything in a city full of others like us.

And they’re still there, those young people. Tonight, and almost every night in the bars, along the Quais, in narrow Paris apartments with funny modern decor, they are there. Maybe smoking a little less. Texting a little more. But I know they are still loping across the city, moving in loose joyful clusters through the grand plazas, past the gilded monuments, crossing bridge after glorious bridge because the Metro stops running long before they’re ready to go home. Fresh faces in a place built on tradition. They are illuminated by that city and also its main light source.

You can see that light, that joy in so many of the photos of the 129 people who died in the devastating attacks on November 13th. And knowing that’s been extinguished for them is almost too much to bear. Because they are us. Or as many of us Americans were, or always wanted to be: A student who got to go for year or two to be educated by the city, a rite of passage, like thousands before her. Someone who came for a year or two and stayed for 20 because they fell in love or were spoiled for any other city. Or a simply young and Parisian from the start.

That’s why when blood flowed in its streets and the cafes emptied, so many people outside of France rose up with hurt and anger too. We, the city’s acolytes count on being able to go there someday, or again. For our honeymoons, or babymoons, or bucket-list trips. For the chance to be some more sophisticated version of ourselves. We want the city to be there for us, we want to find it the same as it is in our imagination. Not wounded, not fearful.

This is selfish of course. We are pining after a vacation place or to relive a well-spent youth even as families grieve, the injured struggle to recover, and French officials grasp at ways to manage endless threat without destroying the very spirit of the place they’re protecting. That unabashed determination to find pleasure and beauty in the every day is what that we come for, and it’s also what the terrorists called out specifically as a reason they attacked.

And as much as the French grouse about, well, almost everything, the idea that their capital city would be locked down, the outdoor cafes a place of ongoing danger, like they are in so many parts of the world, is not tenable. As if to affirm that fact, Hemingway’s “A Moveable Feast,” which is called “Paris Is a Celebration,” in French was sold out on Amazon a week after the attacks. And before that tragic weekend was even over, residents had already started using the hashtag “Jesuisenterrasse,” calling people back out to the outdoor terraces of the cafes and to the bars and plazas, asking them to post pictures of themselves outside, drinking wine.

Over on this side of the Atlantic, we posted our own pictures of Paris from last month, or 30 years ago. There we were, teenagers in front of the Eiffel tower, couples at Notre Dame, children posed along the perfectly kept walkways of the Jardin du Luxembourg. It seemed tacky at first, but romanticizing that city is perhaps the greatest compliment. Plus it seems built to be romanticized, to seduce those of us from the new world.

Sure, there are Starbucks all over the place now, and too many fast food places. There’s poverty and inequity and racial problems and all the things that we have at home. And now terror. But you can still walk for an hour in almost any direction and never run out of loveliness. And we count on the French, again, selfishly, to keep it that way.

And I’m not sure they’d want us clunky Americans with our practical coats and inadequate language skills to stay away either. We all hope that the talented and the curious, people of all races and ilks will be still drawn to visit or live there. That the dinner party will go on. After all, the French have been hosting the most interesting people in the world for a hundred years, along with us wannabes. Americans in particular. You can’t even begin to list the writers, artists and musicians who came there for a while or for life. It affected their work and thereby, our cultural identity, our very nature.

So when we say, nous sommes tous Parisiens, we’re all Parisans, and plaster our Facebook pages with pictures of ourselves illuminated by that city, we’re not necessarily purveyors of shallow social media sympathy. It’s as much a wish as anything else.

Schrobsdorff is the Assistant Managing Editor at TIME. 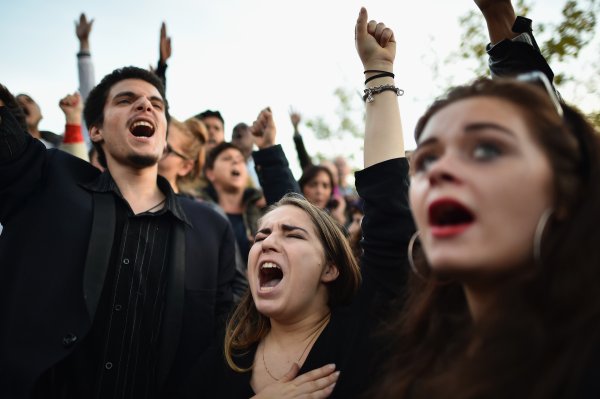