Inside Microsoft's Plan to Unlock the Full Power of Your Phone

The weekend before Microsoft’s biggest event of the year, one of its most ambitious new products was still far from finished.

Like other technology giants, Microsoft holds an annual event showcasing its latest gadgets and ideas about the future direction of computing. This year, the Redmond, Wash.-based company showed off an ambitious concept called Continuum during its Build event. The feature allows Windows 10, the latest version of its operating system, to run on a wide variety of computing devices.

Microsoft first demonstrated Continuum on desktops and tablets in January, when it unveiled Windows 10. Now, the concept is coming to smartphones. Thanks to Windows 10, the company’s Lumia 950 and 950 XL smartphones will be able to power a desktop-like experience. Plugging the new phones into a dock, monitor and keyboard turns them into the brains powering an experience similar to what you’d expect from a traditional PC.

Continuum does more than simply enlarge what’s displayed on the phones, however. With the feature enabled, these Lumia phones will launch desktop-like versions of Windows 10 apps, not the stripped-down software often found on a mobile device. The devices were expressly designed to have the processing power and other technical specifications needed to run fully fledged apps.

But just days before Microsoft’s Build conference kicked off in late April of this year, the smartphone version of Continuum still wasn’t ready to be shown off. Microsoft Program Manager Liz Threlkeld recalls working through the entire weekend, barely sleeping or leaving the office, in order to get Continuum stable enough to at least open an app. It was unfamiliar territory for Microsoft, which typically finalizes products long before the public has a chance to see them. Luckily for Threlkeld, the pieces fell into place. “The first thing we opened was Excel,” says Threlkeld. “When we opened Excel and saw the desktop version of the app, seeing that app light up on screen like that, we were basically crying we were so happy.”

The rough idea that would become Continuum was born three years ago. Peter Mikkola, principal group program manager for long range product management at Microsoft, initially touched on the concept during a team meeting in November 2012. At that point, Mikkola and his colleagues were wondering how they could expand the basic functionality of a smartphone, especially for users in emerging markets who rely on mobile devices as their primary means of getting online.

“That’s where the really early concept started to come together, in terms of having one device that can be a great smartphone but also a great PC at the same time,” says Issa Khoury, a principle product manager for long range product management at Microsoft.

Internally, the project became known as “Wizard and Tin Man,” a nod to The Wizard of Oz. The smartphone is the wizard, as it brings brains to otherwise unintelligent screens. The name “Continuum” didn’t come about until this year. “[The name was] interesting because all of us that grew up in the United States had an instant connection with this,” says Peter Bergler, a principle group program manager at Microsoft. “Obviously Microsoft is quite a melting pot, and there are a lot of folks here to whom that meant nothing. So we had to introduce this whole Wizard of Oz concept to them.”

After testing the idea with various focus groups in the U.S. and China, Mikkola and Bergler decided it was viable enough to turn into a real product. One stumbling block: many in the company didn’t feel the same way. Continuum required coordination among many groups across Microsoft. Bergler would frequently hear questions like: “Are you sure all of these people are going to do this? You’ve got 20 teams you’ve got dependencies on, if any one of them doesn’t deliver, you’re not going to do it.”

The debate was put to an end after Continuum was shown to Microsoft higher-ups, including Windows and devices chief Terry Myerson. He bought in, giving the project the momentum to move forward. “That was a huge turning point,” says Bergler. “Myerson looked at this and said this is our differentiation, we have to do this. And we rearranged priorities.”

Microsoft’s Windows software still dominates the desktop market, but its smartphone efforts have barely made a blip on the radar. Windows Phone devices claimed only 1.7% of the global smartphone market as of the third quarter of this year, according to research firm Gartner. By comparison, devices powered by Google’s Android accounted for 84.7%, while Apple’s iPhone held 13.1%. Microsoft is hopeful Continuum will be a selling point that convinces consumers to take another look at its smartphone offerings, especially considering rivals like Apple aren’t doing anything like it. With its new Lumia smartphones, Microsoft’s pitch is this: Today’s phones are powerful enough to run a desktop experience, so they should.

The company is not the first to have the same thought: A Kickstarter project called Andromium is attempting a similar feat with Android devices. And Motorola’s Webtop concept, which allowed phones to act as the brains for a bigger monitor, was killed off in 2012 amid lackluster demand. But computing history is littered with concepts that, while clearly articulated early on, failed to come about until much later. (Microsoft founder Bill Gates outlined the future of tablets a decade before the iPad made the concept a reality.)

Microsoft is confident that Continuum will succeed where other attempts haven’t because mobile hardware is finally ready to live up to expectations. “The demands are very high when you say that something is going to be a desktop replacement,” says Bergler. “We were not going to ship this if it wasn’t going to fulfill the promise of having a desktop in your pocket.”

Some challenges remain, namely changing users’ behavior. “One of the big problems we found early on was, [when] you put this thing in someone’s hand and you say this is your desktop, they don’t get it,” says Bergler. Another potential speed bump: smartphone shoppers might see Continuum and shrug their shoulders. “For most people, this is not a problem that needs to be solved,” says J.P. Gownder, a vice president and principal analyst at research firm Forrester who tracks the smartphone industry. “It’s a very interesting feature for a specific set of people.”

Despite these caveats, Microsoft says the reception from testers and partners has been positive. PC-maker Acer, for instance, initially intended to release an Android version of its Jade Primo phone before developing a version that ran Windows 10. Instead, it decided to go with Windows.

Microsoft has big plans for Continuum. Currently, the feature is only found on Microsoft’s new Lumia 950 smartphone launching on Nov. 20, which start at $600 without a carrier contract. Bergler says that won’t always be the case. “We may decide we want to bring this to lower-rent phones,” he said. “We may want to compromise the way that it works on a $75 phone compared to a $600 phone. But until people understood what the potential was, we felt like we would not capture their attention.”

Microsoft is already looking at ways to make Continuum feel even more like using a regular desktop computer. There are some features Microsoft didn’t get to squeeze into the initial release, for instance, such as the ability to pin icons and apps to the task bar like you can in the full desktop version of Windows 10. The Action Center also looks different in the desktop version of Windows 10 versus mobile.

Bergler is confident that, once people try Continuum, they will glean to the concept. “People feel like this is something they’ve been waiting for,” he says. “It’s something that’s been promised to them for a very long time. It’s in that flying car and artificial intelligence category of things that we’ve been expecting and are taking longer than we thought to get here.” 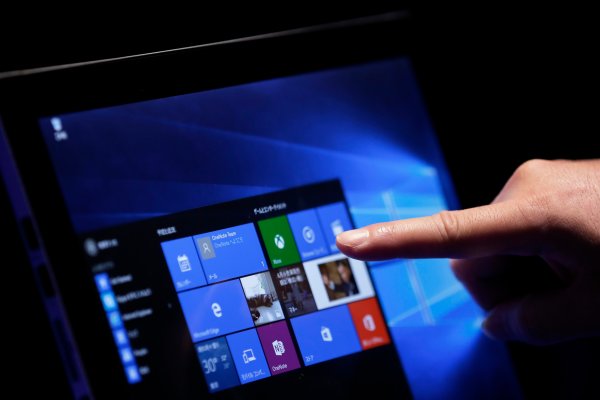