Last Friday morning, the French government announced that the country’s economy had begun to grow again after a flat second quarter. Paris didn’t even get 24 hours to celebrate before ISIS-affiliated terrorists struck. These five facts explain the potential economic fallout of the Paris attacks—and why it matters in the wake of such a tragedy.

Early signs point to resilience, and there is historical precedent for that. On the first day of market trading following the 9/11 attacks, the S&P 500 fell 5 percent—but by year’s end, the market was up 5.1 percent. The Madrid bombing in March 2004 pushed Spain’s benchmark stock market lower by 3.1 percent, but it closed the year up 9.5 percent. Following the London bombing in July 2005, the FTSE 100 plunged 4 percent before finishing the year up 7.4 percent.

It’s too early, of course, to tabulate the full costs of the Paris attacks to the French economy, but the general performance of the CAC 40 on Monday—down just 0.08 percent compared to Friday—is a heartening sign that investors see limited economic fallout.

Yet the real concern is the indirect costs that terrorist attacks can entail. In response to 9/11, America launched a 13-year war in Afghanistan that ended up costing $685.6 billion, according to the Congressional Research Service. The war in Iraq cost $814.6 billion. Together these wars cost the lives of more than 6,800 U.S. servicemen—more than double the casualties on 9/11. A decade and a half later, it’s not clear that the U.S. is any safer from terrorism. Americans are certainly more vigilant, but that was true on September 12, 2001.

Until September, France had limited its bombing campaign to ISIS targets in Iraq and accounted for just 3 percent of airstrikes in the US-led offensive against ISIS. In the past five days, France has launched three waves of airstrikes in Syria and has promised many more—its lone aircraft carrier, Charles de Gaulle, is currently en route to the eastern Mediterranean carrying 24 more jets. This is an understandable show of strength, but a military overreaction can end up costing a country dearly, especially if France is drawn more deeply into a geopolitical mess like Syria. President Francois Hollande has already declared that France is “at war” with ISIS—and acknowledged that its military response will force deficit spending at a time when France badly needs greater fiscal discipline to restore the country’s long-term economic health.

One of the many reasons these attacks were so jarring is that instead of targeting symbols of French culture or power, they targeted seemingly random locations frequented by Parisians. Whereas January’s Charlie Hebdo attack had a specific political message behind it, the point here seems to be that no one is safe, regardless of their politics or ideology. 89 people were killed at the Bataclan Theater; 19 people were gunned down at the La Belle Equipe, 15 at the Le Carillon and Le Petit Cambodge, another 5 killed at the Cafe Bonne Bière, and at least 1 was killed in the explosion outside the Stade de France.

The economy of Paris is built on its nightlife and cultural offerings. Following the Charlie Hebdo attacks, restaurants and bars saw 68 percent of their reservations cancelled—given the targets this time around, Paris should brace itself for worse. Friday morning’s economic report detailed that the French economy had started growing again on the back of strong consumer confidence—consumer spending had increased 2.6 percent in September compared to the same time last year. That confidence may have taken a big hit.

It’s not just the confidence of Parisians that matters: France is the world’s #1 most visited country with 83 million foreign tourists in 2013; tourism accounts for a full 7 percent of the country’s GDP. And though the broader French stock market dipped on Monday before rebounding, Air France fell 5 percent, as did the French hotel group Accor.

Nine days after the Charlie Hebdo attacks, revenues from tourism had fallen 25 percent, and it had plunged another 26 percent over the 10 days after that. Following the Tunisia beach attacks this summer, the BBC tried to unpack the effect that terrorism had on tourism, concluding that “the figures suggest that the tourism industry in countries enduring long-term strife, such as Egypt, suffers more than those affected by individual terror attacks.” If France faces another major attack in coming months, it might fall into the “long-term strife” category.

If nothing else, the last half-decade has shown that economics dictates the politics of the E.U. Germany gets to be Germany because it’s the economic engine of Europe—Greece has to be Greece because it isn’t. France is the Eurozone’s second-largest economy (and sixth-largest in the world), and has used its position to play mommy to Germany’s daddy. Its GDP makes up 15.3 percent of the E.U.’s total, and it contributes 16.27 percent of the E.U.’s total operating budget. For Eurozone countries exhausted by German demands for austerity, France has been a welcome voice for compromise. Europe needs France to remain an economic power and a political powerbroker.

Europe also needs France to remain in the E.U. A revitalized French economy was supposed to help pro-EU politicians like current president Francois Hollande keep a surging Marine Le Pen and her anti-immigrant Front National at bay. Numerous polls taken before last week’s attack had Le Pen at or near the top among presidential hopefuls. Le Pen has repeatedly called for France to leave the E.U., even referring to herself as ‘Madame Frexit.’ It’s still too early to tell how much of a boost these attacks will give her and her party, but regional elections in a couple weeks will give us a good indication of where things stand politically in this angry, grief-stricken nation.

Sadly, there’s a real possibility that France and Europe’s problems are just beginning. 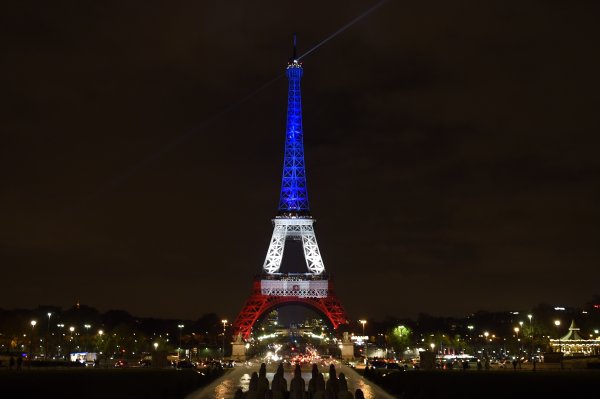 Here's Everything You Need to Know About the Paris Attackers
Next Up: Editor's Pick