The suspected mastermind behind Paris’s devastating terror attacks is dead. That was the word on Thursday from French police, when they announced they had positively identified the body of Belgian Abdelhamid Abaaoud, 27, and a key figure in the Islamic State of Iraq and Greater Syria (ISIS), which claimed responsibility for the attacks that killed 129 people in Paris on Nov. 13. Abaaoud had been the subject of a massive manhunt in both Belgium and France, for having allegedly coordinated the six synchronized attacks on the French capital.

Police confirmed that they had killed Abaaoud when anti-terrorist police stormed a house on Wednesday before dawn, in Saint-Denis in the northeast of Paris. In an operation that began at 4.20 a.m. and lasted six hours, one woman blew herself up with a suicide belt, and one other died by “grenades and other projectiles,” according to Paris prosecutor François Molins in Saint-Denis on Wednesday. That second person, it turned out, was Abaaoud.

France’s Interior Minister, Bernard Cazeneuve, said at a press conference that officials did not know that Abaaoud was in Europe before the deadly attacks. He was believed to be behind at least four of six attacks thwarted since the spring.
With the city still on edge from nearly a week of tumult, Prime Minister Manuel Valls warned parliament on Thursday, “we know that there could also be a risk of chemical or biological weapons.” Valls, who did not elaborate how he knew that information, was addressing the French parliament during a debate over whether or not to extend France’s national state of emergency, which President François Hollande imposed within hours of last Friday’s attacks. Hours later the parliament approved the measure with overwhelming support.

Abaaoud’s death is likely a huge relief to French officials. It ends his career as a key operative within ISIS, which had featured him in its propaganda magazine as a leading light and recruiter of Western jihadists.

French officials had linked Abaaoud to Mehdi Nemmouche, the French man who shot up the Brussels Jewish Center in May last year, killing four people. He was also implicated in the foiled attack this past August on the high-speed train that links Brussels and Paris, which was thwarted when three American holidaymakers wrestled an armed gunman to the ground. Police sources have also told French journalists that a jihadist they arrested over the summer had mentioned Abaaoud to interrogators, and suggested that there were plans to attack nightclubs in Paris.

Wednesday’s raid in Saint-Denis brought a first for Europe: A female suicide bomber. The woman detonated an explosives belt minutes after police stormed the apartment and shouted, “where is your boyfriend?”—an apparent reference to Abaaoud. “He’s not my boyfriend!” she shouted, according to an audio of the conversation captured by police and transcribed in the French press on Thursday. Then she blew herself up. France’s BFM television identified the woman on Thursday as Hasna Aitboulahcen, 26, a cousin of Abaaoud, who was born in the Paris suburb of Clichy. 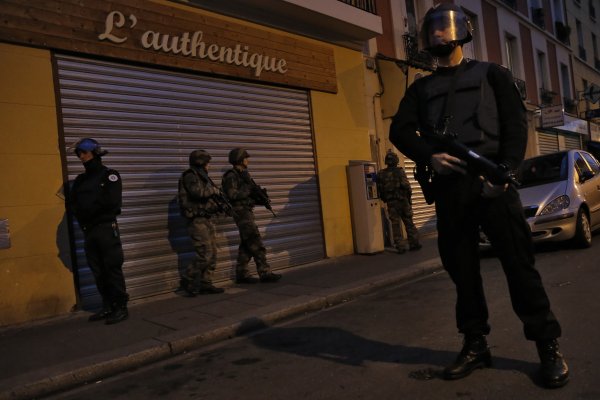