Journalist and writer Ta-Nehisi Coates won the National Book Award for nonfiction on Wednesday night for Between the World and Me, his acclaimed tract on American race relations.

The prize in fiction went to Adam Johnson for Fortune Smiles, a collection of stories. His novel The Orphan Master’s Son earned him a Pulitzer Prize in 2013.

Coates, a writer for the Atlantic, has emerged as one of the U.S.’s most influential voices on matters of race. He wrote Between the World and Me, which TIME described as a “provocative and extraordinary work,” as a letter to his teenage son, a strategy he borrowed from his intellectual progenitor James Baldwin.

“Coates’ work reveals a lifelong quest to resolve these inner conflicts and fight off a prevailing sense of hopelessness,” Vanessa De Luca, editor in chief of Essence, wrote for TIME in August. “He wants to do so, if not for himself, then for his son, whose optimistic approach to life convinces Coates there is yet room for hope.”

“At the heart of our country is the notion that we are O.K. with the presumption that black people somehow have an angle, somehow have a predisposition to criminality,” the Guardian quotes Coates as saying after receiving his award at the prize ceremony in New York City.

At the ceremony, Robin Coste Lewis was awarded the National Book Award for poetry; the prize for young people’s fiction went to Neal Shusterman. 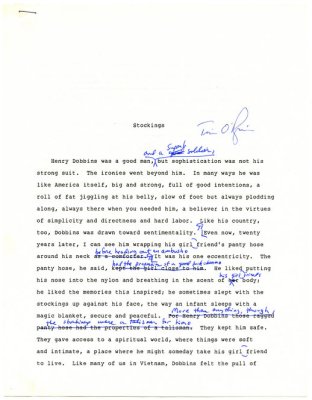 See an Original Manuscript Page From 'The Things They Carried'
Next Up: Editor's Pick