A Look Inside Mizzou's Crucible of Race

A member of the black student protest group gestures while addressing a crowd following the announcement that University of Missouri System President Tim Wolfe would resign in Columbia, Mo on Nov. 9, 2015.
Jeff Roberson—AP
Ideas
By Berkley Hudson
Berkley Hudson is associate professor at the Missouri School of Journalism.

I grew up white in Mississippi where my ancestors first arrived to a crucible of race in the early 19th Century. My ancestors owned slaves. My father’s Main Street Service Station had three restrooms: Gentlemen, Ladies and Colored. After college, I left Mississippi and wended my way around America as a journalist.

Now, I teach at the University of Missouri, and I chair the Race Relations Committee of the Faculty Council on University Policy.

Mike Middleton, a descendant of slaves, grew up black in Mississippi. His ancestor was among the first African Americans to become lawyers during Reconstruction. After Middleton earned his undergraduate and law degrees at the University of Missouri, he worked for the U.S. Justice Department. Later, he returned to his beloved Mizzou, first to teach, then to serve as Deputy Chancellor.

Now Middleton is the interim president of the University of Missouri System with its four campuses. He was selected after one of the most difficult weeks since the school’s 1839 founding as the first public university west of the Mississippi.

Middleton serves on the race relations committee with me and 10 other faculty, students and staff. We, along with many others, are searching for ways to resolve misunderstandings and fear about race in a place still known as Little Dixie, once a junction point in the Civil War. We’re south of the Grits Line of Interstate 70,100-plus miles from Ferguson, Missouri. You already know versions of that story.

Our group was formed earlier this year, prompted by a plea for help from former Chancellor R. Bowen Loftin after he held the first in a series of listening sessions devoted to the events in Ferguson.

No one has been shot or killed here on campus. But, as with many other places in America and the world, there is an ongoing murder of our collective spirit when we fail to take the time to listen to one another’s soul-breaking stories about race, ethnicity and culture.

“I’m already getting emails calling me a racist,” Middleton said. “How am I a racist because I am concerned about students who are being called names? We never talk, respect the legitimacy of each other’s viewpoints. Everything is a harsh sound bite or slogan. We’re not listening, not talking honestly, not respecting each other. We need to slow down and think, and be rational intelligent human beings and try to resolve this problem. Let’s be truthful. Let’s be real.”

Since May, often two hours a week every week, our committee has sought to have conversations that must be had. Our sessions are closed to ensure frankness.

More than one of us is a big-hearted, white conservative, evangelistic Christian. That includes an agricultural economist, originally from New Mexico. A young black kick boxer comes from Chicago. Already he has defied the black male odds by being alive. (He is not in jail but headed to graduation.) An atheist, Latina endocrinologist is from Bogota, Colombia.

There’s a business professor and former executive who has been stopped “driving while black” more than a few times near St. Louis. There’s an African American child psychiatrist from Kansas City, a white and Christian mathematician from Britain whose Jewish grandparents survived the Holocaust, a white teacher of teachers, a fescue expert who is white and was born in the same Mississippi hospital as I, and a Puerto Ricana from New Jersey, the first in her family to go to college—and complete her master’s.

Among our number also is graduate student Jonathan Butler, an African American who went on a hunger strike that toppled the university’s two leaders. Daily during his strike, his social media posts quoted the Bible. His actions were independent of our group. Not all of us supported his life-and-death strategy. To a person, though, we supported him. Many prayed for him; all of us were relieved when he ate once again.

Weekly in our group, we have asked questions such as these: If you deny that racism is an intractable problem in America, are you a racist? If you use a bullhorn to yell to a university system president who hasn’t responded to your entreaties, are you hateful? Delusional? A crybully?

Most recently, we’ve asked: Can we agree to stay around the table, to stay in the room, to have the difficult conversations?

Each school day, I walk past gray stone columns with bas-relief images of two of the university’s founders, James Rollins and John Lathrop, white slaveholders who were visionaries about the transformative role of higher education in America. As I look at the bronzed visages of the dead, bearded white men, I ponder this:

If we cannot find a way to write a script for others to have these conversations at Mizzou, will we continue to see that white pickup truck, parading around town and shouting as loud as any bullhorn, with its unfurled, large American flag and Confederate flag? And will the bullhorns of demanding students continue to blare?

Berkley Hudson is associate professor at the Missouri School of Journalism. 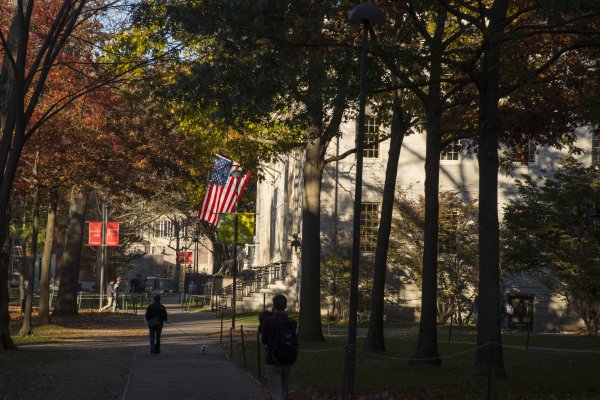 Black Professors’ Portraits Defaced at Harvard
Next Up: Editor's Pick