Why the World Weeps for Paris

Mourners observe a minute of silence at the Trocadero in front the Eiffel Tower to pay tribute to the victims of the attacks on Paris.
Philippe Wojazer—Reuters
Ideas
By Matt Vella

Another autumn has become a season of mass grief.

The world watched—in real time this time—as a series of terrorist attacks tore through the French capital on the evening of Nov. 13. The rampage shootings, suicide bombings and hostage taking targeted Parisian cafes, restaurants, boulevards, concert halls and the Stade de France, where a friendly soccer match with Germany was being held. The horror, claimed by the Islamic State of Iraq and Syria as its own, killed 129 people and injured some 350 more. In January, during an assault on the Paris offices of the satirical newspaper Charlie Hebdo, radicals attacked free thought, expression, tolerance. In November they came again to strike at levity, joy, sport, music, youth.

The machinery of state ground into gear, French President François Hollande calling for a war to annihilate ISIS and launching air strikes in Syria with American and international support. Domestic police and European counterterrorism units pulled a dragnet across the continent to find other plots and root out accomplices, resulting in two more deaths when a woman blew herself up during a standoff in the Paris suburb of Saint-­Denis on Nov. 18. “France is at war,” Hollande told a joint session of Parliament at the Palace of Versailles.

But it was the outpouring from individuals that was most remarkable. Their reaction was immediate and, because words are hard, images came fastest. Facebook portraits were masked with the tricolor flag. Instagram was flooded with posts of honeymoons and semesters abroad captured in front of the Arc de Triomphe, the Palais du Louvre, the Sacré-Coeur. Images of Le Petit Prince and Madeline filled social media, as did pictures of monuments around the world painted in lights blue, white and red. French artist Jean Jullien’s Peace for Paris illustration rendering the Eiffel Tower as a peace sign went viral.

Some correctly noted the attacks in Beirut the day before had not received the same attention, not to mention earlier tragedies in London, Kenya, Madrid, and too many other places. It is true that this massacre, the deadliest in France since World War II, was greeted differently, that the world seemed more shaken, more people moved. But why?

For one, the Internet has codified its rituals of grief over the past decade. Its norms are now as well defined as the protocols for sitting shivah or effectuating a Tibetan burial. There is the profile photo overlay. There is the somewhat immaculate conception of the hashtag—#PrayforParis in this case, which was used 6.7 million times in a matter of hours. There are the real-world ceremonies that seem designed to be photographed and shared online like New York’s Tribute in Light, the powerful searchlights that annually memorialize the downed twin towers. (This installation, like the Eiffel Tower, was supposed to be temporary but is now too iconic to dismantle.) Social media has allowed people to participate and sympathize in ways, however small, with those who may be thousands of miles away.

But also, this is Paris, the world’s most visited city and likely its most idealized. The city, synonymous with love and light and food, is a dream for hundreds of millions of people. For Americans, the bond is especially strong. The blip of “freedom fries” not withstanding, Americans love Paris and Parisians love America. If you had visited Le Bon Marché, the grand department store owned by LVMH in the seventh arrondissement, this fall, you would have found the most studiously curated exposition on Brooklyn, complete with American-made artisanal pickles and tattoo artists flown in from Williamsburg. (Brooklyn is America’s most successful export to France since Jerry Lewis.) For many Americans—like Franklin, Jefferson, Wharton and Hemingway before them—Paris is the first experience of something foreign, something European. It makes great, if ironic, sense that Euro Disney is situated on the drizzly outskirts of Paris rather than the sunny shores of Barcelona as once proposed.

Paris is, above all, a city of leisure. In France nothing is easy—just try getting a taxi or waiting in line at the post office. But in Paris, everything is enjoyable. When Americans say one of our cities is “European,” we really mean it is like Paris: open, insouciant, filled with art. It is the city that turned aimless wandering into philosophy; the city that transforms its murky riverfront into a sandy beach in the summer just because it’s hot; the city that constantly asks itself, “What is beauty?” and puts its hypotheses—the crystalline pyramid of the Louvre, the gilded cherubs of the Pont Alexandre III—in the street for all to see. Above Haussmann’s spacious boulevards, Parisian apartments are so cramped one is practically forced out into the street. And what you find there is magic.

ISIS knew this and chose its targets accordingly. The 10th and 11th arrondissements, for instance, are not tourist-heavy or particularly luxe. Nor are they the primarily occupied by French students, like the district around the Sorbonne. They are social estuaries where the city’s various ethnicities and classes mix freely. One of the bars, Le Carillon, is run by Algerians. The Bataclan, the music hall where over 80 people died, had been long-owned by Jews. As the newspaper Liberation put it, the victims were defined by a certain “cultural openness, liberal habits and a cosmopolitanism that doesn’t exclude a convivial kind of patriotism.” As a result, there were 19 nationalities among the victims.

The mood in Paris now is not vengeful, but dignified and defiant. The Parisian way of life—the cosmopolitan way of life—is under attack and the young are responding with a sort of joyful protest, clinking glasses of wine on terraces and congregating in crowded bars. They know that death only makes sense once we have experienced life, with its happinesses large and faint, its mournings, its incomprehensions and its absurdities. They know fanatics who detonate themselves may not fear death but they will never know what life really is. They know it is life itself terrorism is afraid of.

Paris meanwhile is an old city, with an ancient motto: “Fluctuat nec mergitur,” Latin for “Tossed but not sunk.” Over the last 1,200 years, it has lived up to that creed, surviving siege by the Romans, the Vikings, the Jacobins, the Prussians and Hitler. Now the world watches and prays Paris will continue to survive this siege of fear as it has the others, with freedom, law and love.

With reporting by Naina ­Bajekal/Paris 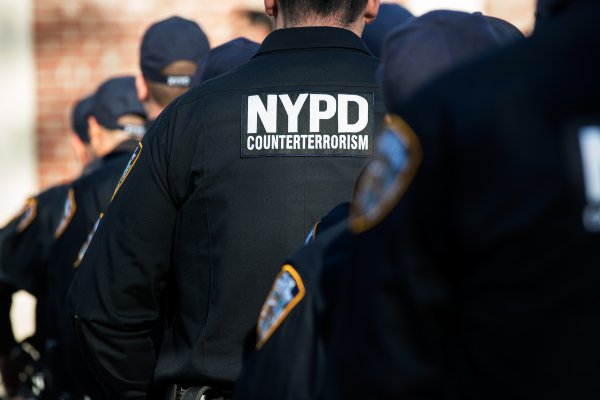 How Safe is the U.S. From a Terror Attack?
Next Up: Editor's Pick