In the wake of the Paris attacks, Republican presidential candidates have blasted President Obama’s plan to admit at least 10,000 Syrian refugees over the next year.

But some of them weren’t always so hostile to the idea of taking in some of the asylum seekers fleeing violence in their war-torn homeland.

Texas Sen. Ted Cruz has offered particularly scathing criticism for Obama’s proposal. Cruz has proposed a religious test for Syrian refugees, plans to offer a bill to bar the nation’s Muslims from entering and challenged Obama to “come back and insult me to my face” after the President blasted Republican adversaries during his trip to the Philippines.

Cruz, who is rising in the polls as he stiffens his stance against immigration, is vying to position himself as the toughest opponent of the President’s policy. But he had a different take last year.

Asked during a February 2014 interview with Fox News about the refugee crisis, Cruz said the U.S. should roll out the welcome mat for some of the more than 4 million Syrians who have been displaced by the brutal war between President Bashar al-Assad’s army and insurgent forces.

“We have welcomed refugees—the tired, huddled masses—for centuries. That’s been the history of the United States,” Cruz said. “We should continue to do so.”

“We have to be continue to be vigilant to make sure those coming are not affiliated with the terrorists,” Cruz added, “but we can do that.”

Florida Sen. Marco Rubio’s rhetoric has not been as charged, but his position is essentially the same as Cruz since the Paris attacks. Rubio argues that the U.S. shouldn’t take any more refugees because there’s “no way to background check,” as he wrote in a tweet on Nov. 15.

“It’s not that we aren’t compassionate. But we can’t. No way to background check,” Rubio tweeted on Nov. 15.

“You can’t pick up the phone and call Syria, and that’s one of the reasons why I said we won’t be able to take more refugees,” he added Sunday. “It’s not that we don’t want to, it’s that we can’t.”

Yet in September, Rubio was open to accepting refugees even as he warned of the potential for someone with ulterior motives to sneak into the U.S.

“We would be potentially open to the relocation of some of these individuals at some point in time to the United States,” he said at a town hall in South Carolina.

Frontrunner Donald Trump has also taken a sharp line against accepting Syrian refugees, arguing that they could be a “Trojan horse” for terrorists. Instead, he’s said that the U.S. should “build a big beautiful safe zone” inside Syria for them to live.

“We cannot let them into this country, period,” Trump said Monday. “Our country has tremendous problems. We can’t have another problem.”

But not long ago, Trump grudgingly acknowledged that there were humanitarian grounds to accept some refugees.

“I hate the concept of it, but on a humanitarian basis with what’s happening, you have to,” Trump told Fox News host Bill O’Reilly on Sept. 8.

Since the attacks, New Jersey Gov. Chris Christie has said the United States shouldn’t accept any refugees, refusing to even make an exception for orphans under the age of five when questioned.

“The fact is that we need appropriate vetting,” he told radio host Hugh Hewitt, “and I don’t think orphans under five are being, you know, should be admitted into the United States at this point. But you know, they have no family here. How are we going to care for these folks?”

But in early September, Christie said that “the United States should play their role” in taking in refugees.

“I’d sit down with our allies and figure out how we can help, because America is a compassionate country. We saw the image of that 4-year-old little boy drowned in Syria, and we can’t have those kinds of things,” he said.

The newfound opposition tracks with public polling showing the majority of Americans are wary of taking in refugees. The GOP opposition drew condemnation from Obama early Wednesday, who suggested the debate was only bolstering ISIS.

“I cannot think of a more potent recruitment tool for ISIL than some of the rhetoric that’s been coming out of here during the course of this debate,” he said, before mocking his opponents. “First, they were worried about the press being too tough on them during debates. Now they’re worried about three-year-old orphans. That doesn’t sound very tough to me.”

John Kasich has had an evolution of his own on the topic. “I think we do have a responsibility in terms of taking some more folks in, making sure they assimilate,” the Ohio governor told ABC in September.

“Maybe there’s a bit of a shift in the position, but in light of Paris and in light of the concern that people have, not just in my state but in my neighborhood, I think it’s very reasonable to say that we need to have a pause,” Kasich told NPR Tuesday.

Read Next: This Is How the Syrian Refugee Screening Process Works 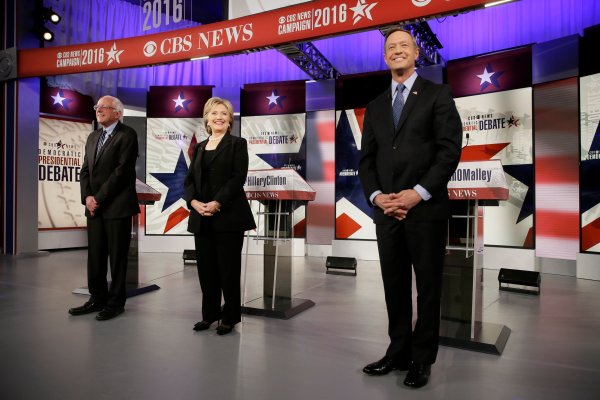 The 2016 Candidates Need Thoughtful Strategies on ISIS
Next Up: Editor's Pick