Eagles of Death Metal: 'We Are Horrified' After Paris Attacks

The members of Eagles of Death Metal, the American band that was performing in Paris when terrorists opened fire on the crowd during a series of attacks Friday, say they are still in shock from last week’s violence and have put all scheduled shows on hold.

“While the band is now home safe, we are horrified and still trying to come to terms with what happened in France,” the band wrote in a statement on its Facebook page. “Our thoughts and hearts are first and foremost with our brother Nick Alexander, our record company comrades Thomas Ayad, Marie Mosser, and Manu Perez, and all the friends and fans whose lives were taken in Paris, as well as their friends, families, and loved ones.”

Within a few hours of the coordinated attacks that killed more than 120 people, the band posted a statement saying they were still trying to confirm the safety and whereabouts of each member and their crew. Eagles of Death Metal’s management confirmed that all the band members were safe, but some associates of the band—such as Alexander, who had been selling merchandise at the show—were later confirmed to have been killed in the attacks at the La Bataclan concert hall.

“Although bonded in grief with the victims, the fans, the families, the citizens of Paris, and all those affected by terrorism, we are proud to stand together, with our new family, now united by a common goal of love and compassion,” the band wrote.

Read their full statement below or on the band’s Facebook page: 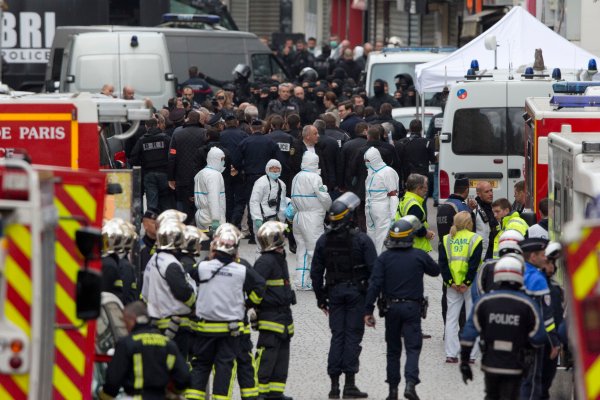 Inside the Paris Suburb Where a Terrorist Cell Was Hiding
Next Up: Editor's Pick