The Fight Against Daily Fantasy Sports Just Got Even Bigger

Odell Beckham #13 of the New York Giants is tackled by Malcolm Butler #21 of the New England Patriots during the third quarter at MetLife Stadium on November 15, 2015 in East Rutherford, New Jersey.
Elsa—Getty Images
By Daniel Roberts / Fortune

After New York’s powerful attorney general sent cease-and-desist letters to DraftKings and FanDuel last week, many observers wondered whether he would also target smaller daily fantasy sports operators. Now we have an answer: Eric Schneiderman’s office has subpoenaed Yahoo, the distant No. 3 in the industry.

The New York Times first reported the news, while a source familiar with the inquiry has confirmed its existence toFortune. The Sunnyvale, Calif. tech giant launched its own daily fantasy platform in July for the current NFL season after it saw other operators were gaining ground by inking partnerships with sports leagues and teams.

The news of a subpoena does not necessarily mean that Yahoo will be part of an emergency hearing scheduled for Nov. 25 in New York. At that hearing, DraftKings and FanDuel will argue that Schneiderman has misinterpreted state gambling laws, while the attorney general will seek to have the companies shut down in New York. But it is a sign that Schneiderman is aware of Yahoo as a daily fantasy sports operator, and isn’t only targeting the two top dogs.

DraftKings and FanDuel, which control a combined 95% of the daily fantasy sports market, have taken diverging approaches in the days following Schneiderman’s cease-and-desist. While both have issued responses critical of his decision, and both will seek to negate his ban in court, FanDuel has halted paid entries in New York, while DraftKings continues to take them and says it will do so until a court rules that it must stop.

Yahoo, meanwhile, has also continued to accept paid bets in New York, though that may change now. In October, Yahoo shut down its operations in Florida because a federal grand jury there is investigating the industry. It has not yet done the same in New York, but the Empire State has more daily fantasy players than any other state, according to Eilers Research.

As Fortune has reported, Yahoo has made fast progress with its daily fantasy sports platform. It remains a distant No.3, but it has been the only daily fantasy site apart from DraftKings and FanDuel to experience a week with a positive rake in football pools, according to data from the research firm SuperLobby. That means it brought in more in entry fees than it paid out in prizes. (Yahoo has still only had one week with a positive rake.)

“Yahoo does not comment on legal matters,” a Yahoo spokesperson told Fortune. “We are monitoring industry trends and events closely and believe that we offer a lawful product for our Daily Fantasy Sports users.”

Schneiderman’s office did not immediately respond to a request for comment.

There are a number of other, much smaller daily fantasy sports sites beyond DraftKings, FanDuel and Yahoo. They have taken different tacks in the light of Schneiderman’s crackdown. DailyMVP, DraftOps, and Draftpot have all shut down in New York. But FantasyHub has told Fortuneit will continue to accept paid bets “until the AG files a Cease and Desist against the company or can prove that Daily Fantasy is in fact not a game of skill.” 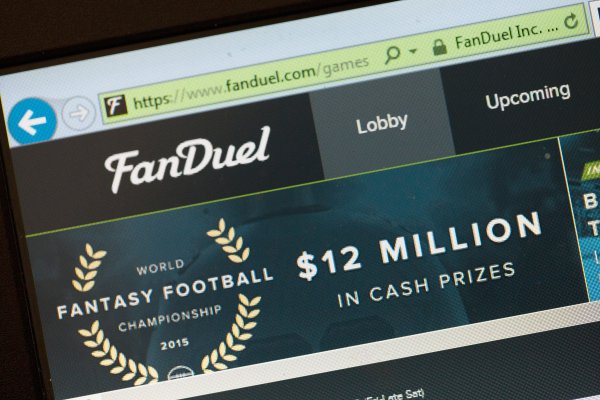 FanDuel Halts Betting in New York
Next Up: Editor's Pick