Ronda Rousey's Defeat Makes Her a New Kind of Hero

Ronda Rousey prepares to enter the Octagon before facing Holly Holm in their UFC women's bantamweight championship bout during the UFC 193 event at Etihad Stadium in Melbourne, Australia, on Nov. 15, 2015
Brandon Magnus/—Zuffa LLC via Getty Images
Ideas
By Dan Wuori
Dan Wuori is a columnist for the pro cycling magazine, VeloNews.

Ronda Rousey has never been more important than she is right now, after losing her first UFC fight in Melbourne, Australia, last weekend.

I’m not the world’s most dedicated or knowledgeable fan of mixed martial arts, but I’ve been following her story these past couple years. She’s been kind of hard to miss, what with the movies and books and hamburger commercials, oh, and the fights. Good golly, the fights.

Watching her in the octagon has, for me, always been window onto another world—one in which a singular champion possesses such skill and focus that no one else could even begin to match her. Indeed, on fight nights Rousey seems to become a different person altogether. Gone is the charming and glamorous young woman we see in late-night television interviews. In her place stands a scowling, apex predator. It’s an alarming transformation.

Though her bouts have been brief, they have consistently been master classes in technical skill and brute force. As a result, she’s been unprecedented, one of the most dominating athletes alive, and an inspiration to both men and women. It’s really been fun to watch.

But I’m not invincible myself, so while Rousey has always had my admiration, she’s never really had my heart. That changed when she stepped into the octagon with Holly Holm in Melbourne.

She came out to the usual strains of Joan Jett’s “Bad Reputation,” and I marveled once more at the intensity with which she approaches her work. But once the fight began and Holm began landing punches, I saw something in her face I’d never seen before: self-doubt. And maybe even fear. I was instantly connected to her, not only as an athlete, but for the first time as a human.

By the end of that brutal first round I knew that this would be the end of the fairy tale. The rest was a blur of devastating punches, splattered blood and, eventually, the kick that would end it all. Rousey’s career and influence stands to be forever changed by this stunning defeat. But not in the way you might think.

Now she has the chance to be a whole new kind of hero. No longer an unstoppable, alien force in a class of her own, Rousey can become something far more important: a truly human champion with whom we all can identify. One with vulnerabilities like ours, who will have to work to overcome a public setback on her way back to dominance.

That’s a champion I could support in ways I never could the woman who entered the ring in Melbourne. I’ll draw inspiration in spades from a champion who can show me how to overcome adversity with grace, grit and determination. Her most important victory is still to come. 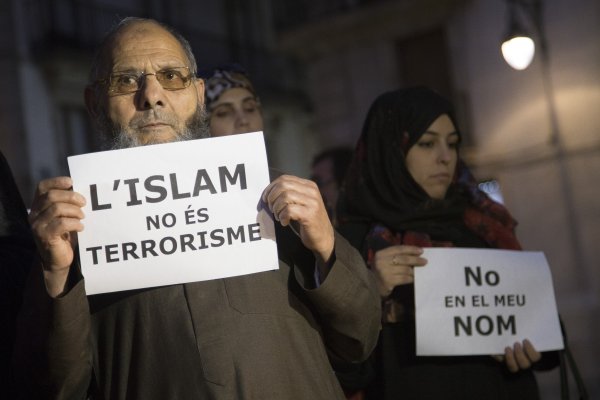 Don’t Blame Islam for the Paris Terrorist Attacks
Next Up: Editor's Pick