How Spider-Man Was Born

Stan Lee, founder of Marvel Entertainment Inc., poses next to a Spider-Man model in his office in Beverly Hills, California, U.S., in 2008.
Jonathan Alcorn—Bloomberg/Getty Images
By Nolan Feeney

Stan Lee, the influential comic book writer who helped create characters such as Spider-Man, Iron Man, the Hulk and the X-Men, says his publisher thought the web-slinging hero was going to be a disaster.

“My publisher said, in his ultimate wisdom, ‘Stan, that is the worst idea I have ever heard,'” Lee told BBC Radio 4 in an interview promoting his graphic-novel memoir, Amazing, Fantastic, Incredible: A Marvelous Memoir. “‘First of all, people hate spiders, so you can’t call a book Spider-Man. Secondly he can’t be a teenager—teenagers can only be sidekicks. And third, he can’t have personal problems if he’s supposed to be a superhero—don’t you know who a superhero is?'”

To get the idea out of his head, a defeated Lee hired an artist to draw the character and snuck Spider-Man in to the last issue of the shuttered series Amazing Fantasy, which went on to become a such a big seller that his publisher came back to him and pitched a series based on the character they both “liked so much.” But because he was a writer for hire at the time, Lee receives no royalties from the character he created, even as the Marvel film universe surpasses the Harry Potter series as the biggest movie franchise ever.

“That’s okay, we’re friendly, everything is fine,” he said. “Marvel now has the best writers available, they have the finest artists … they just can’t do a bad comic book, and they certainly cannot do a bad movie.”

Listen to the full interview, in which the reporter breaks the news to Lee that his character Iceman is gay, over at BBC Radio 4. 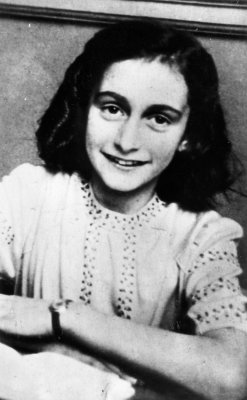 Anne Frank's Diary Now Has a Co-Author to Extend Copyright
Next Up: Editor's Pick