Iraq Vet: We Created ISIS—Now We Need a Plan to Defeat It

A Super Etendard fighter jet before its departure from the naval base of Toulon, France on Nov. 18, 2015.
Jean-Paul Pelissier—Reuters
Ideas
By Alexander Lemons

Armchair generals, presidential candidates, military generals and our foreign policy officials are out in force in the wake of the Paris attacks offering angry responses. It’s difficult to watch the cacophony. I learned too much while fighting in Iraq over three tours not to offer a plea: Have we learned nothing in the last 14 years? Virtually all of the rhetoric from Main Street to Washington is to double down on a failed strategy.

The civilians killed in Paris seem to be pawn sacrifices in ISIS’ greater game to impact foreign policy and civil government. We have seen this strategy before in the ideas of Osama Bin Laden—conduct a devastating attack with the goal of eliciting a thoughtless military response that gets Western nations bogged down in a country where they are universally distrusted no matter how good their intentions are. Once embroiled there, the insurgency wears down the multinational force by proving that no matter how many insurgents you kill, their ideas or political objectives live on.

At the same time, the Western governments crack down on civil liberties while expanding the surveillance state and alienating sections of the population that look like potential terrorists. This harassment of our own Muslim populations only makes for radicalization.

ISIS is our monster. Our government picked the winners in Iraq, and our push for the 2005 national elections hastened the civil war from which ISIS grew.

A boots-on-the-ground invasion would likely end just like our adventures in Iraq or Afghanistan. We are terrible at the decades-long process necessary for nation and army building. It cannot work when our political leaders and the American people are not willing to make an equal sacrifice through processes such as raising taxes or calling for a draft.

Pursuing containment while focusing on a wider, more inventive diplomatic solution is the least bad option. We should continue to bleed the group through proxy raids and targeted killing, but we cannot win the whack-the-mole game. We should focus on destroying ISIS’ financial network and oil revenue, continuing intelligence gathering, boosting cyber attacks, and disrupting recruiting efforts outside of Syria and Iraq.

But containment cannot take away the possibility of further terrorist attacks. Even if you wipe out ISIS, there are other Sunni insurgent groups from Al Nusra to Liwa al-Tawhid to Jaysh al-Muhajirin wa-al Ansar that may fill the void. The bigger point we are not hearing is the recognition that the Syrian Civil war is a political struggle in need of a political solution. Either the country must be partitioned along sectarian lines or a settlement must be reached wherein a new government shares power amongst the various ethnic and religious sects.

In addition, the refugee problem will not go away. Syrians cannot be expected to stay and fight when there are more 1,000 groups battling amongst each other and receiving aid from various proxies. And placing individuals and families in a purgatory state inside a refugee camp only fuels frustration, sorrow and ultimately the desire to join an extremist group.

Some of my ancestors sold themselves into indentured servitude to the colony of Georgia in order to escape Civil War. Others fled the Dustbowls in Oklahoma and moved state-to-state in a refugee-like status until the people of Idaho welcomed them. My fellow Marines and I brought five translators and their families out of Iraq with us. If I were a Syrian father or son, I would pack my family on my back and leave without hesitation. As Warsan Shire says in “Home”:

I don’t have all the answers, and I would be deeply suspicious of anyone who did. This Marine remains stubbornly optimistic because of the knowledge that the past never goes away. It may require several more years to defeat ISIS within the existing proxy war, and the Syrian Civil War may continue in stalemate for several years, but the opportunity for the government of Iraq to reconcile with its Sunni countrymen remains.

ISIS a symptom of a political disease. As long as we ignore the source of the problem—political disaffection with governments in the Middle East and Western powers who support them—this disease will live on. 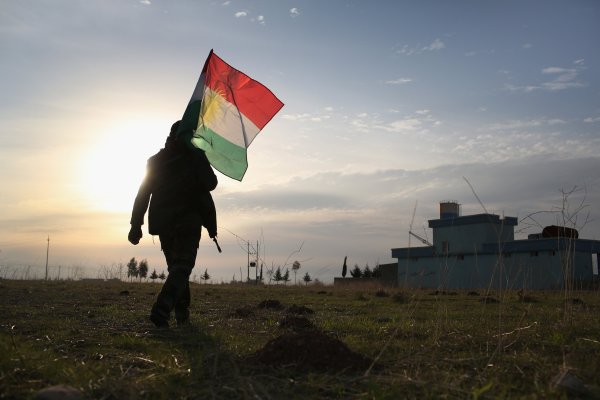 How the U.S. Can Exit a Permanent State of War in the Middle East
Next Up: Editor's Pick