Ben Carson: The U.S. Must Not Accept Any Syrian Refugees

The carnage in Paris last Friday reminded us all of the evil of Islamic extremism. President Barack Obama has promised to “bring these terrorists to justice.” Yet his administration appears altogether oblivious to the threat posed by an influx of refugees from war-torn Syria into the U.S. homeland. Furthermore, in the war against Islamic extremism, the President cannot even bring himself to confront the enemy by its name.

This Monday, I sent letters to Senate Majority Leader Mitch McConnell and Speaker Paul Ryan urging Congress to terminate all public funding for ongoing federal programs that seek to resettle refugees from Syria into the U.S. I also call on the American people to stop viewing Islamic extremism through the lens of political correctness.

We now know that several teams of ISIS terrorist attacked six different locations in Paris, killing at least 132 people and wounding hundreds more. We have also learned that one of the terrorists responsible for this grotesque attack may have left Syria posing as a migrant and was able to gain safe entry to France, Belgium and perhaps other central European countries.

Given the tragedy in Paris last Friday, the U.S. simply cannot, should not and must not accept any Syrian refugees. Unfortunately, the Obama administration has pledged that the U.S. would accept an additional 45,000 new refugees, mostly from Syria, from 2016 to 2017. This must not happen. Instead of half talk and feel-good promises, the U.S. must defend itself with sound security measures.

Paris offers a bloody reminder that we must not be afraid to confront those who harbor the jihadist views that have spread violence and hatred around the world.

Although President Obama and presidential candidates from the Democratic Party prefer to describe radical Islam as just a form of extremism, the rest of us should remember that jihadists who have spilled blood on our soil before and must never be allowed to do so again.

If we thought Islamic extremism is a phenomenon reserved for foreign lands, terrorists have made sure to expose our naiveté. From London to Paris, Sydney to Madrid, Fort Hood to Chattanooga, radical Islamists and their lone wolf followers have inflicted their savagery across the civilized world. Paris now offers the latest gruesome reminder of radical Islam’s barbarism.

Given this troubling reality, and given the bloodbaths that have been perpetrated in the name of Islam in the modern era, I announced a few months ago that I personally would not support having a Muslim president in the White House if he or she had not renounced Islamic extremism, Sharia law or the tenets and practices of Islam that are in conflict with the Constitution.

Certainly, not every Muslim subscribes to jihadist ideology. Throughout my career, I have worked with superb Muslim Americans. Many more have served America honorably by joining the U.S. military, fighting for America overseas, working with federal and local law enforcement to combat radicalization in their own communities and publicly denouncing the violent or misogynist teachings of radical Islamists.

For their decency and courage, we should be grateful. Unfortunately, their own communities have often viciously vilified them as heretics and infidels.

The reality is that the threat of radical Islam and the corrosive influence of Sharia law here in the U.S. is not just a figment of our imagination. The U.S. must defend itself by preventing the infiltration of terrorists who pose as refugees to enter our land. To do anything less is foolish.

Dr. Ben Carson is a Republican candidate for president. 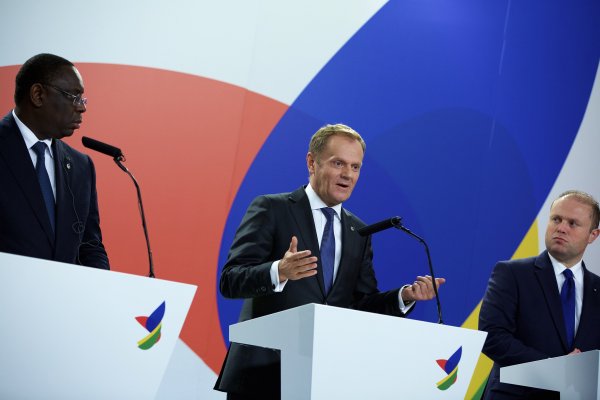 The Only Way to Stop African Migrants Is to Improve Life at Home
Next Up: Editor's Pick