Many of the Greeks on the island of Leros took it as a given, considering the size of this year’s flood of refugees, that a terrorist would occasionally slip into Europe among them. Their little patch of paradise occupies less than 29 square miles in the eastern Aegean Sea, yet it has registered around 32,000 migrants arriving by boat from Syria and other conflict zones only in the last nine months. That’s roughly quadruple the island’s total population.

So this weekend, when the Syrian passport of one of these arrivals was found next to the mangled body of a suicide bomber in Paris, the authorities on Leros were not surprised. Nor do they plan to tighten security on the island after one of the worst terrorist attacks to hit the European Union in recent memory. “There will be no new measures,” says a senior source in the Leros security forces, who requested anonymity to discuss matters internal to the local police. “We will continue to do our job just as we did until now.”

According to Greek authorities, the passport found next to the body of one of the Paris attackers on Friday was registered as arriving on Leros on Oct. 3 along with a group of dozens of other migrants. Nikos Tosca, Greece’s deputy minister of citizen protection, said in a statement on Saturday that the man “was identified according to E.U. rules” upon arrival in Leros. Some officials have suggested that the passport, which bears the name Ahmad Almohammad, could be a forgery.

On Monday, Germany’s Minister of Justice urged “very, very great prudence” in assessing whether the passport is genuine. “We are aware that [ISIS] is known to leave false tracks behind to politicize and radicalize the issue over refugees in Europe,” Minister Heiko Mass told the German broadcaster ARD, referring to the terrorist group that has claimed responsibility for the Paris attacks. On social media, some observers have also suggested that the document may be a ploy to paint all Syrian refugees as potential terrorists in an effort to impede their exodus.

But regardless of its provenance, the document’s journey to Paris along the so-called Balkan route, which roughly half a million migrants have used to reach Western Europe this year alone, has fueled the fears of nations welcoming refugees into their cities and their homes. After first appearing in Greece, official records show that the holder of the passport requested asylum in Serbia on Oct. 7 before moving on to Croatia and crossing back into the E.U. via Hungary over the next few days. Even with the tighter controls installed at internal E.U. borders late this summer, it would have been easy for a migrant to travel onward from there to France.

Since this summer, when the influx of refugees began to peak, Greek authorities had complained of an inability to register so many arrivals, many of whom traveled with no documents of any kind. “We ask for help in trying to identify all of them,” says Kyriakos Papas, an officer of the Greek coast guards stationed on Leros this year. “We ask Europe to help us with these people. But the politicians put this problem under the carpet.”

In early September, when the Greek coast guards took TIME on a patrol in the Aegean, Papas and his crew mates were well aware that dangerous stowaways could be among the migrants they were rescuing each night from the waters near the maritime border with Turkey. “They seem like good people,” Papas remarked after helping to pull another boatload of migrants onto the deck of the coast guard vessel. “But on every boat, there may be one or two from the jihad. We don’t know.”

It’s not that the people of Leros don’t care. They merely seem resigned to these security risks, which they see as unavoidable for any community that welcomes refugees. On balance, the locals say, the risks are justified in light of the moral imperative of helping people fleeing war, hardship or persecution in their homelands. So after the Paris attacks, “the people of Leros still care about the refugees the same way,” says Giorgos Koubaros, a local handyman. “Nothing changed for us,” he tells TIME by phone from Leros on Monday.

The island’s police force takes the same view, according to the source in the security forces. They see no sense in casting blame for the fact that a terrorist might have snuck onto one of the migrant boats, as there is no way to determine what intentions a person has on arriving in Europe.

“They do not come with guns,” says the source, who is closely familiar with the policies related to the registration of asylum seekers in Leros. “They are like anybody else. Most people are real refugees. They are hunted people who didn’t want to leave their homes, who lost families and friends in that war. We cannot start treating the refugees as criminals because of the jihadists.”

But security on Leros has left much to be desired in recent months. During a visit to the island in September, reporters for TIME saw that migrants had turned the courtyard of the local police station into a makeshift refugee camp, sleeping on scraps of cardboard beneath the baking sun as they waited for officers to register their arrival. This process usually took about a day, and it seemed to involve little more than a name and other basic information jotted down in a notebook, especially when the migrants arrived with no identifying documents, claiming to be Syrian.

The migrants’ fingerprints were rarely if ever taken on Leros, and when the influx picked up in late summer, the maritime police responsible for processing arrivals set up a little registration desk right on the pier, taking names and countries of origin from the asylum seekers as they disembarked from the coast guard vessels that had plucked them from the Aegean hours earlier.

On Sept. 6, two reporters met a 9-year-old Syrian boy on the island, Abdelhay Eydy, who had been separated from his parents along the migrant trail. The local police later told social workers that they had no record of a boy by that name ever arriving on the island.

Nor do the local authorities have any systems in place to check the authenticity of the passports that migrants present, and the source in the local security forces says that is unlikely to change after the Paris attacks. “Who’s to say if a passport is fake or real?” asks the source. “Some public services in Syria may be under the caliphate’s control,” he says, referring to the territory in Iraq and Syria that has fallen to the terrorist group known as ISIS. “They are able to print passports, and there is no real official authority to contact… They do not even have a fingerprint database. So when someone shows you a real-looking passport with a name, how can you question that?”

That attitude may seem cavalier to other European nations, who have taken a far more rigorous approach than the Greeks in documenting the arrival of migrants. But to the people of Leros, the bureaucratic aspects of granting refuge come second to the humanitarian priorities. “We were expecting that jihadists were among the refugees,” says a priest in the Orthodox Church on the island, who spoke to TIME by phone on Monday on condition of anonymity, citing the sensitivity of these issues following the attacks in Paris.

“It was something we were discussing at the coffee shops,” he says. “We are helping them, but who knows what some of them are dreaming of doing to us? There are too many people coming. You cannot know who is who. You have to help them all, but you also know that some are killers.” 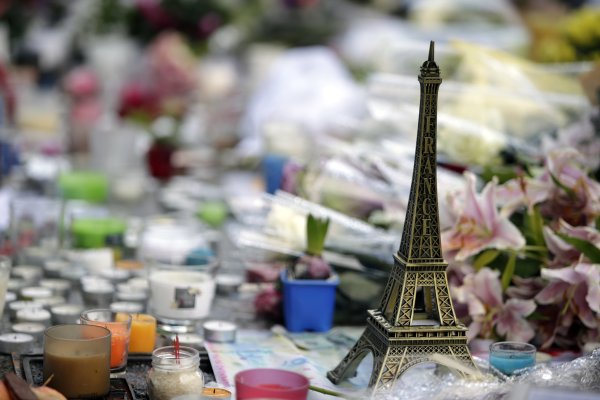 Watch a Father and Son Have a Touching Conversation About the Paris Attacks
Next Up: Editor's Pick