Charlie Sheen’s appearance on Today Tuesday morning, in an interview with Matt Lauer, answered one question, regarding his health status, but raised numerous others.

The news of Sheen’s medical status was not broken by Today: The Two and a Half Men actor had been the subject of reporting on Monday, including by PEOPLE, indicating that he was HIV-positive. But Sheen’s appearance shed light on precisely how Sheen will handle his new status as a public-health symbol of sorts. While Sheen expressed hope he’d “kick the door open” in helping to end stigma around HIV, his appearance, suffused with paranoia, was not a promising beginning.

Sheen is best-known, perhaps, for a 2011 period in which he made a series of increasingly erratic public statements; it was roughly during this period in which he received his diagnosis. “Roughly,” here, is because Sheen was unable to convey the answer of timing with any more specificity than “about four years ago.” And when interviewer Matt Lauer raised the question of Sheen’s actions during his 2011 public meltdown, Sheen laughed the entire thing off, calling the period “more of a ‘roid rage.'” (He said he does not know how he contracted HIV but breezily dismissed the idea he’d ever used needle drugs.)

The actor was open about the fact that he was conducting the interview not to shed light on an aspect of his life or to serve as a role model of sorts, but to stop a series of shakedowns he’d allegedly endured at the hands of sex workers who’d threatened to leak the news of his health status to tabloid media. He began the interview by declaring that “I have to put a stop to this onslaught, this barrage, of attacks, of sub-truths.” Asked how he thought the media would react to his interview, he said with more than a hint of anger, “I would hope it would be more forgiving and supportive than some of the garbage I was reading the past couple days.”

But a vigorous, impassioned defense seemed easier to come by than actual truths. Asked whom he had told about his diagnosis, Sheen replied: “I’ve told enough that I trusted to be in the position I am today.” He was more at home outside the realm of pure facts, making a bid for the audience’s hearts, declaring that “What people forget is: that’s money they’re taking from my children.”

HIV is certainly life-altering, but, as Lauer himself pointed out, it’s no longer perceived as tantamount to death in the way it was, say, at the time NBA athlete Magic Johnson came out with his own HIV diagnosis in 1991. It’s understandable on a human level that Sheen wanted to keep his health news private, but his elaborate descriptions of prostitutes taking photos of his medicine cabinet may have the unfortunate effect of communicating a new sort of stigma. The difficulty of pinning him down on how exactly he could be sure he hadn’t transmitted HIV—despite claiming to have had unprotected sex with women while “under the care of my doctor”—lent a further note of discomfort to the proceedings.

As a piece of television, the Sheen interview was a slippery, uncomfortable thing; the human impulse for empathy ran up against Sheen’s well-documented ability to produce meaning-free but self-aggrandizing word salad, not least when he said he planned to “deliver a cure” for HIV. Asked if he might be in criminal trouble for potentially not having divulged his HIV status, he replied: “Having divulged it is the reason I’m in the mess I’m in with all the shakedowns.” The Today interview was a stress-inducing portrait of HIV as a sentence to years’ worth of turmoil; it’s hard to imagine that this framing did anything to reduce stigma. 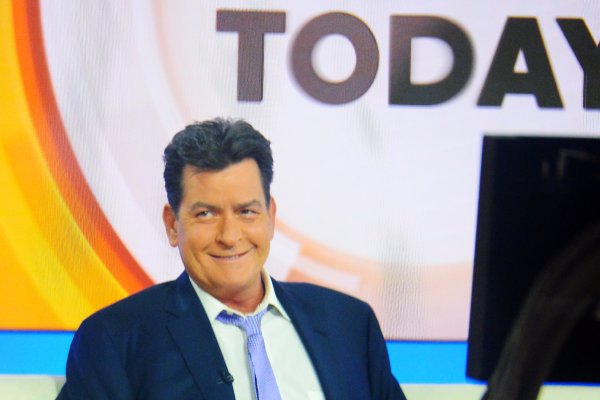 Charlie Sheen Reveals He Is HIV-Positive
Next Up: Editor's Pick